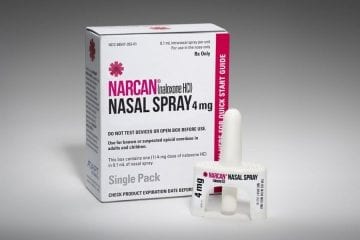 Narcan (Naloxone) is part of the battle against opioid overdoses.

During its Aug. 1 meeting, the Dare County Board of Commissioners unanimously approved a proposal that determines how the county plans to spend the roughly $422,000 it will receive from the national $26 billion opioid litigation settlement for the 2022-2023 Fiscal Year.

This initial allocation, which will be used in part to fund an overdose response coordinator as well as a probation officer for the county’s drug court, is the first payment in what will total $3.4 million paid out to the county over the next 18 years. The national settlement was reached last year with four companies that manufactured and distributed opioids and were accused of helping fuel the nation’s opioid crisis.

Dare County Health and Human Services Director Sheila Davies made the presentation to commissioners, explaining that the proposal was developed with the input of several community partners, including the Healthy Carolinians of the Outer Banks Executive Committee, the Breaking Through Task Force and the Saving Lives Task Force.

The funds must be used to address three areas – treatment, recovery support and harm reduction. Davies said that the department anticipates seeking stakeholder input each year before coming to the commissioners with a proposal for that year’s allocation.

Of the $422,000 allocation, $70,000 will be used to continue the overdose response coordinator position within the health department, a position that was originally grant-funded. The probation officer position, a newly created slot, will account for $100,000 of this year’s allocation.

“This person would handle the logistics in supporting individuals going through recovery court, with all the requirements that they have to meet and the coordination that’s involved in supporting their success,” Davies said.

There would be $125,000 set aside for community initiatives in which agencies doing relevant work in the community could apply for a grant that would be vetted by the Saving Lives Task Force.

Also under the proposal, $40,000 would be earmarked for a Fentanyl Kills Mass Public Awareness Campaign, $25,000 would be used to link residents in need to treatment and another $30,000 will be dedicated for naloxone distribution in the community, which Davies said currently is being funded with grants that will be ending soon.

Finally, $12,000 will fund fentanyl test strips “so individuals can test the drugs that either they’re using or they have gotten, to see if it’s laced with fentanyl,” Davies explained.

“Sadly, a number of our overdoses resulting in deaths in Dare County over the past couple of years have occurred where individuals took a substance that they had no idea was laced with fentanyl, and it’s such a small amount that can be lethal,” Davies told the commissioners, adding that the department would like to make these testing strips widely available in the community.

In conclusion, Davies acknowledged that “These are the recommendations…understanding that yes, these are band aids.”

While adding that detox services and residential treatment facilities have been cited as important needs, Davies noted that the funds from the settlement would not come even close to being able to support such an endeavor.