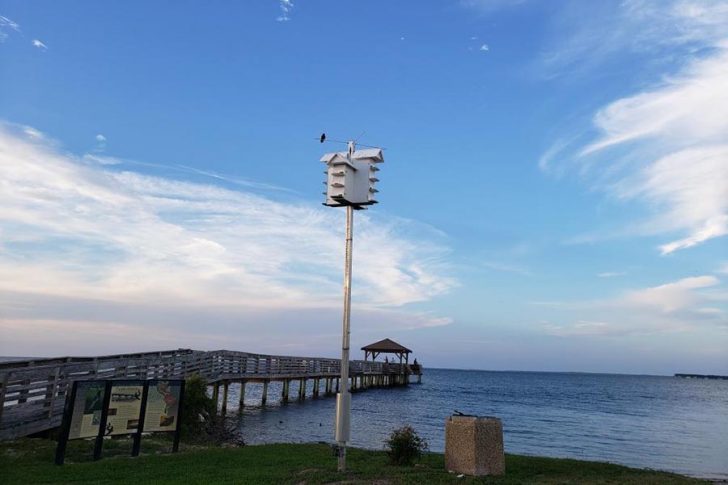 For the past 50 years or so, the William B. Umstead Bridge, also known as the old Manns Harbor Bridge, has been a favorite roosting spot for close to 100,000 purple martins that come from all over eastern North Carolina.

But those numbers have been significantly declining for the past several years, with this year’s estimate currently at only about 500 or so, according to representatives of the Manns Harbor Coastal Carolina Purple Martin Society.

The society’s chair, Michael Gery, told the Voice via email that while no one knows for sure why the numbers have declined at the roost, he has learned that it isn’t unusual for purple martins to move elsewhere to roost before heading south.

“This occurrence is curious because the roost has sustained itself for more than fifty years,” he noted. “We’re trying to get some understanding of what happened, but so far we have nothing definitive.”

The declining population at the Manns Harbor roost doesn’t necessarily point to a declining population, but it could simply mean that the birds have chosen another temporary roost for the time being. “Maybe they didn’t feel like coming up so far, or maybe they decided [to try someplace else] for the summer,” the society’s vice chair, Gail Hutchinson said.

The swallows, known for their acrobatic flying, first make their appearance in North Carolina and other U.S. destinations each year around March, when they travel from Brazil to nest primarily in bird houses or gourds that are set out by their human admirers. Come late summer, the popular birds leave their nesting colonies to spend time at a roost to feed, take care of fledglings and rest before migrating back to South America.

While at their roost, the birds leave at dawn to feed and then return at dusk. During these two times of day, they have been putting on a show at the old Manns Harbor Bridge as the agile flyers swarm and swoop in such large numbers that during the flock’s peak, it has been seen on radar.

“When I first started in 2013 [as a member of the society], there were huge numbers and it was pretty amazing to watch,” Hutchinson said, adding that before the COVID pandemic hit, there were sunset cruises on the Crystal Dawn that would go out to the bridge when the purple martin flocks were returning at the end of the day.

While their low numbers don’t warrant the sunset cruises this year, Hutchinson said that nonetheless, the birds that are out there are very active and still a sight to see. And again this year, as in years past, the N.C. The Department of Transportation has temporarily lowered speed limits from 55 mph to 20 mph on the bridge and has put up flashing lights during roosting season to protect the purple martins from vehicular traffic.

And for Hutchinson, who goes out to the bridge several times a week to make sure the birds are happy, it’s easy to say what she loves about the purple martins.

“I love their story, that they come from Brazil and choose us,” she said. “And I just love listening to them, they are so chatty…and they are so cool-looking when they fly, they look like stealth fliers. They can really turn on a dime.”

Hutchinson holds informative purple martin chats at the BeBop observation pier on the Manns Harbor side of the bridge each Wednesday evening in August at 7:45 p.m.