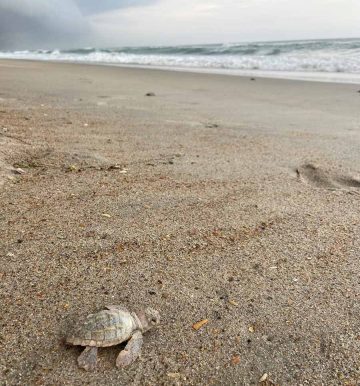 On July 23, the first sea turtle nest hatched on the Cape Hatteras National Seashore. Since then, several more nests have hatched, and park biologists have started nest excavations.

During a recent excavation on July 27, a live, leucistic loggerhead sea turtle was found at the bottom of the nest chamber. It was released that evening when it crawled its way into the Atlantic Ocean. This genetic deviation is rare since we typically only see a few per year. What does leucistic mean?

At first glance it may look albino since it lacks the typical pigment and coloration of a loggerhead sea turtle. Albinism occurs when there’s an absence of melanin, which makes the animal appear white with eyes pink in color. Leucism is similar, but the sea turtle still has some pigmentation, and its eyes are often normal in coloration.

If you see a sea turtle while visiting the Cape Hatteras National Seashore, please call 252-216-6892.