Family of Manteo shooting victims bring their memories to court 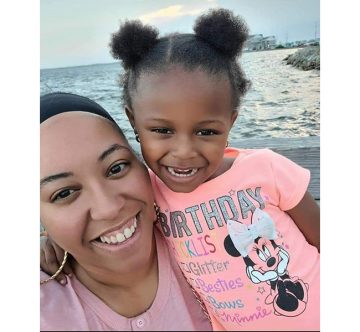 The two defendants charged with the murders of three people, including a Manteo mother and her 3-year-old daughter in Elizabeth City last December, will not see trial until at least next year.

The shooting on Dec. 2, 2021, resulted in the deaths of Manteo residents Takeyia De’Shay Berry, 39, and Allura Pledger, 3, as well as Elizabeth City resident Jaquan Tobias White, 18. Three other men were injured in the shooting.

On Aug. 1, about a dozen of Berry’s and Pledger’s family members showed up at court in Elizabeth City, most of whom wore white T-shirts with gold lettering stating, “Will truly be missed and never forgotten” at the top and “Takeyia Berry & Allura Pledger” under a photograph of the deceased.

Joann Selby and her brother-in-law Daniel Selby came from Manteo and wore the T-shirts. Berry was their niece and Pledger was their great-niece.

“We’re going to support this right till the end,” Joann Selby said of the court proceedings. “It’s our family.” When asked if anything like this had happened to the family before, she responded, “No, and we hope it doesn’t happen to nobody else’s. What was done to them was not fair.” She said some of White’s family members were in attendance at court as well.

Three of the T-shirt wearers were Berry’s father, aunt and grandmother, who came from Virginia. They left after a court employee told the family that the defendants’ administrative hearings had been split and the one for Etheridge had been changed to the following day.

Ebony Selby, Berry’s sister, also came from Manteo and wore the memorial shirt. She is caring for Berry’s surviving 17-year-old daughter and called the incident “just absolutely heartbreaking. I can barely form words most times.”

Ebony Selby said she wants to attend all the court dates and keep up with what’s happening with the case. “I don’t want my niece and sister to be forgotten in a jammed-up court system.” She added: “I want to make sure they [the courts] have who they are supposed to have and have everything in place to be able to convict.”

Right after the incident, Ebony Selby had told The Virginian-Pilot that Berry was in Elizabeth City because she had given a man — one of those injured by gunfire during the same shooting that killed her — a ride there. She believes that man had put Berry in a dangerous situation, hoping her presence would deter any potential violence.

Officials have not released details about the circumstances around the shooting or any possible motive.

According to the North Carolina Department of Public Safety records, Etheridge, 34, was most recently incarcerated for a 2017 charge of possession of a firearm by a felon. He was released from jail in November 2020, after serving 2 years and 1 month.

Etheridge had been on probation four times since 2006 and in jail on one other occasion, for the 2010 charges of carrying a concealed weapon and possession with intent to sell Schedule II substances, which revoked probation for his 2009 charge of assault by pointing a gun.

Seymore, 38, had never before been incarcerated, according to NCDPS records. He served probation on three occasions, most recently for his 2018 charges of possession with intent to sell Schedule II substances and assault on a female.

As of press time, NCDPS records still had not been updated to reflect current inmate status for the defendants, but they have both been in custody for months.