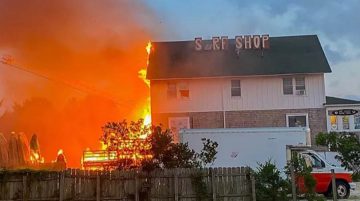 Update: A GoFundMe campaign has been started for the residents and employees who were affected by the Aug. 3 fire at Duck Village Outfitters, which is owned by Bob and Tanya Hovey. Fundraiser by Emily Masters : Please help! Locals lost everything in fire (gofundme.com)

A fire was reported at Duck Village Outfitters, a surf and watersports shop in Salvo village, on Wednesday night, August 3, per multiple reports.

Per residents close to the scene, the fire started at around 8:00 p.m., and the Chicamacomico Banks Fire & Rescue Department responded to the fire within minutes. Additional local organizations, including nearby Hatteras Island volunteer fire departments and Dare County authorities, were responding to the incident as well as of 9:00 p.m.

Drivers who are traveling along N.C. Highway 12 in Salvo can use Colony Drive as a detour, which runs parallel to the highway, to avoid delays and emergency vehicles at the scene.

The surf shop encompasses the first level of the structure, and residential apartments are reportedly located above the shop. There are no injuries reported at this time, but the Island Free Press will post updates as soon as they become available.