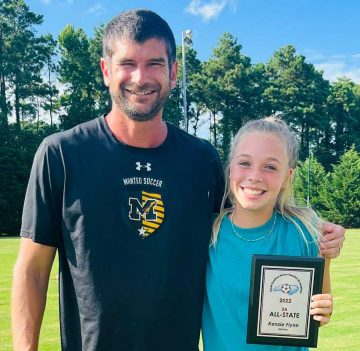 Mackenzie Flynn, seen here with her coach Ralph Cleaver, was honored with a coveted spot on the North Carolina Soccer Coaches Association 2022 2A All-State soccer team, one of only four freshmen to garner such an honor at any size school in the state.

As a freshman, Mackenzie (known as Kenzie) helped lead the Manteo team through a great season, going deep into the playoffs. Unfortunately, at the end of a third-round playoff win vs. Franklin Academy, Mackenzie suffered a season ending injury at the very end of the game, costing her a dislocated Shoulder and a Broken Clavicle.

During that season, Mackenzie scored 44 goals and garnered 10 assists in 21 games, which earned her the Offensive Player of the season honors for the Manteo team.