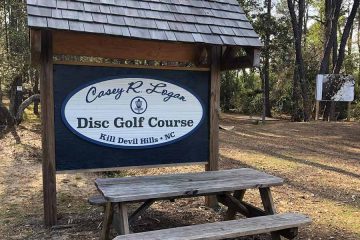 Speakers at the Aug. 8 meeting voiced their support for the disc golf course..

During its August 8 meeting, the Kill Devil Hills Commissioners voted 4-1 against rezoning the town-owned 44-acre Baum Tract – home to the popular Casey R. Logan Disc Golf Course – from its current permitted government/recreational use to a high-density multifamily use. Mayor Ben Sproul cast the dissenting vote.

The vote followed a public comment period in which nearly a dozen local residents voiced their opposition to such a change, as well as a staff report that included a laundry list of concerns cited by community stakeholders and town department heads regarding the potential negative impact such a change of use could have.

While the vote was specifically against any change of use, it ultimately halts any further consideration of that tract as a potential site for high-density multifamily units.

In June, the commissioners directed staff to investigate the possibility of the parcel being used for the development of essential housing. That request was in response to an inquiry from Coastal Affordable Housing, LLC., the group that has been contracted by Dare County Commissioners about specific plans to construct as many as 400 units on the parcel.

In the early 1980s, one-time Mayor Diane Baum St. Clair partially donated more than 322 acres to the town, with the 44-acre tract accounting for the western portion of that parcel. At the time, Baum St. Clair asked that the land be used for the benefit of the entire community. The Kill Devil Hills municipal buildings, First Flight Schools and Outer Banks Chamber of Commerce also sit on the Baum tract.

“Let’s stop it right here,” Commissioner Terry Gray asserted before he introduced the motion against pursuing a change of use, a comment that garnered applause from the audience. “This tract is not for [that use].”

Commissioner John Windley seconded the motion. Windley said that he would like to see the town add enhancements to the disc golf course, adding that, “Character matters and we had an agreement with the Baum family that [the tract] would be used toward the benefit of the public.”

According to the staff report, the concerns of stakeholders ranged from traffic, environmental impacts, and the loss of open space to the incompatibility with surrounding areas, the impact on the First Flight schools, increased costs to the town and the parcel’s isolated location.

Among the community stakeholders who offered opinions in the report were representatives of Dare County Schools, Nags Head Woods, the Wright Brothers National Memorial and the Dare County Sheriff’s Department.

The majority of those who spoke during public comment voiced their support for the disc golf course and the positive impact it has had on the community and beyond. One of those speakers was Bob Sanders, a Nags Head Commissioner and one of the volunteers who helped clear and develop the site into the course.