Property to house police station, may include medical offices 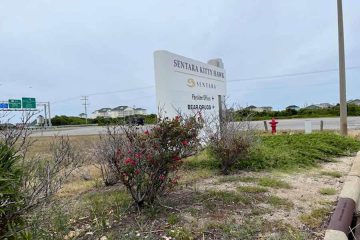 Meeting during an Aug. 10 special session on the town’s pending $4.1 million purchase of the former Sentara Medical Center from Pasquotank County, the Kitty Hawk Town Council discussed its plans for the 30-day due diligence period on the property.

And while the town has stated its intent to turn the site at 5200 N. Croatan Highway into a public safety facility that will house its new police station, council members also discussed the possibility of leasing out four suites at the center for medical purposes. The council also agreed that if and when the purchase is finalized, longtime tenant Bear Drugs would be allowed to remain in the building under a new lease.

In explaining the purpose of the due diligence period, which can be extended an additional 30 days if needed, Town Attorney Casey Varnell told council members at the meeting that if the town discovers something during its inspection of the property, or the survey shows some kind of flaw, it could back out of the contract and get its deposit back.

“The idea of due diligence is that you’re…doing all that you should to investigate the property to determine whether or not flaws exist before moving forward with the purchase,” he said.

Town Manager Andy Stewart outlined the steps in the due diligence process that have been completed, including a mechanical and electrical inspection, a termite and rodent inspection and a fire safety inspection. Commercial building, mold and septic system inspections are yet to be completed as well as a survey and a title search.

“We want to make sure that any repairs, any issues that are found, are known in advance before we sign on the dotted line to make such a purchase,” Stewart said. The town turned its sights to the property this spring after learning that it would cost more than $9 million to build a new police station on town-owned lots near Bennett Street.

The town’s police station is currently located in the old Post Office building on Kitty Hawk Road and has been subjected to significant flooding in recent years.

During the meeting, Kitty Hawk Police Chief Joel Johnson outlined for the council the portion of the existing building that he and department staff believed would work best for the new police facility and indicated that, “We are ready to move forward.”

When asked by Mayor Craig Garriss whether his department was settling for something rather than getting the building it wanted, Johnson said, “It’s our best option and it’s best for the town and the taxpayers.”

During the meeting, Garriss said the town has been contacted by an interested party that may be interested in leasing four of the suites at the center for medical purposes.

Councilman David Hines said that he would be in favor of leasing those suites for medical purposes when the time comes, adding that the Outer Banks is losing doctors at a high rate and residents can’t get lab work done.

“If that right side of the [building] works for the police department and they are happy and content…I don’t see any reason why it’s not a win-win for everyone to also have some doctors in Kitty Hawk,” he stated.