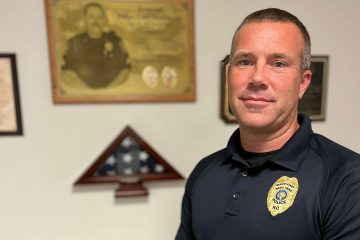 Update: While the Nags Head press release did not indicate where Police Chief Webster was going, a post he has written on the Elizabeth City website identifies him as the Interim Police Chief there.

“As your Interim Chief of Police, I am committed to creating innovative approaches to delivering excellent police services in a fair, equitable, humane and compassionate manner,” reads the message from Webster. “I am committed to promoting this community by preserving the peace and reducing criminal elements so that citizens and visitors may live and conduct business without concern or fear.  Our police officers adhere to a policy-structure-law approach and are guided by the core values of integrity, honesty, responsibility, professionalism, fairness, and respect.”

An effort to reach Webster for immediate comment was unsuccessful.

In a short and terse statement issued on Aug. 10, the Town of Nags Head announced a changing of the guard at the top of the town’s police department.

Here is the statement.

“Town Manager Andy Garman announces the departure of Police Chief Phil Webster from the Town of Nags Head. The town wishes him well in his future endeavors. Long-time employee and Deputy Police Chief Perry Hale has been appointed as the Interim Police Chief until a permanent replacement can be found.”

For background, Webster was hired in 2019 to replace retiring Nags Head Police Chief Kevin Brinkley, who is currently a member of the Nags Head Board of Commissioners. Prior to taking the job here, Webster had spent his 25-year career with the North Myrtle Beach Police Department, the last three and a half years as the chief there.

This is Hale’s second stint as Nags Head Interim Police Chief as he stepped into that role during the period between Brinkley’s retirement and Webster’s hiring.