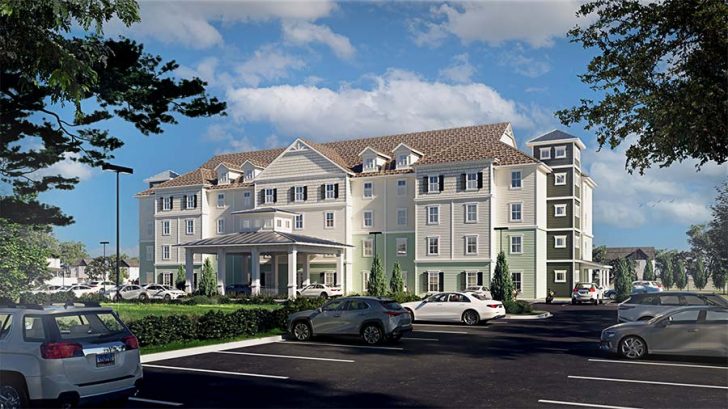 Rendering of the proposed hotel. (Town of Nags Head)

By a 4-2 vote on Aug. 16, the Nags Head Planning Board recommended that the town commissioners approve the site plan for Inn at Whalebone, a four-story 90-unit hotel being proposed for 6632 W. Pheasant Avenue.

Board members Molly Harrison and David Elder cast the dissenting votes, citing concerns about traffic flow and safety as well as stormwater management at the site. Other members voiced similar concerns about the project, but in voting to recommend approval, they acknowledged that the site plan complied with town standards.

The property, situated near the Duck Thru gas station, is just south of Nags Head Golf Links and the Village at Nags Head and just north of the Soundside Event site where the event center is being proposed. The hotel would be accessed off of Lakeside Street, which is used as an access to the residential subdivision of Roanoke Shores, which lies west of the proposed hotel.

House Engineering, P.C. of Kitty Hawk is the applicant for the project, which would be located in the Village at Nags Head Hotel District. There are 93 parking spaces proposed for the hotel, which includes architectural features such as dormers and a covered porch area.

During the planning board discussion portion of the meeting, Elder addressed the potential traffic conflicts at the site. “There are just a lot of minor conflicts and what I’m hearing and seeing is that none of it is really conflicting with the zoning as it is.  But in a community where, with service and infrastructure we are already at peak…how are we going to deal with this,” he said.

Harrison and others echoed Elder’s comments. “I understand that they are compliant with everything, but I have serious concerns about the traffic,” Harrison said.

For his part, Planning Board Member Meade Gwinn voiced concern over hotel guests trying to cross U.S.158 on foot. “You have a lot of people who might want to walk over to the beach,” she said. “I’m concerned about not only vehicles coming out onto U.S. 158 from Lakeside, but I’m also concerned about foot traffic – [people] with little kids and umbrellas and stuff trying to walk across the street to get down to the ocean.”

Board Member Kristi Wright added that, “I can tell you that I turn down Lakeside on a regular basis and it’s a problem now before you even put that hotel there,” she said. “It’s hard to maneuver…It’s hard to get in there.”

Gary Ferguson expressed concern about the project as well but added that it meets the zoning ordinance and thus, leaves the planning board with no other choice.

“Given that I think it’s totally out of character with the area…that’s not the issue. I mean, the issue is really that they meet the zoning [requirements], and therefore, I think our hands are somewhat tied. It’s a permitted use. It’s like building a single-family house in a residential zoning district,” he said.

In the end, Gwinn made the motion to recommend approval.

“This does meet all of the requirements, is consistent with the vision and the focus of Nags Head and will be a wonderful complement to the event site that will be built over on the soundside,” Gwinn said, adding that traffic issues remain.

“I do believe that [between] the time of approval to the time that construction begins on this project, that there would be considerable thought and some action taken that would focus on the safety of pedestrian traffic, as well as vehicular traffic coming off of Lakeside,” Gwinn added.

The Board of Commissioners are expected to take up the site plan at its September meeting.