No plans yet for Kelly/LIDL Nags Head site 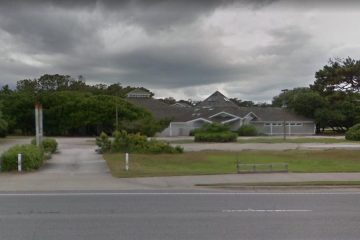 The property’s newest owners say they are still discussing plans for the site. (Google Maps)

One of the new owners of the property that once housed Mike Kelly’s Outer Banks Restaurant &Tavern in Nags Head says the company “do[es] not have any plans as of now,” for the site, and that they are reviewing a range of options including combined commercial and housing uses as well as a project that is solely housing.

Local building contractor Merritt Hooper, one of three partners in the Nags Head 99 LLC that purchased the property in February 2022, said the group is in discussions with architects and other commercial entities about ideas for the site. (He declined to name the other partners.)  In response to a Voice question, Hooper said that any timetable for approaching the Town of Nags Head with a plan is still well off in the future.

Whatever ends up on the five-acre property will end a years-long stretch in which the once bustling site in prime territory along the bypass has stood bare and abandoned.

In 2017, Mike Kelly sold his iconic restaurant and music venue to the German grocer LIDL for $3.9 million. After LIDL had gone through a bumpy Nags Head process to secure a site plan for a 36,000 square ft. grocery store, it abandoned its plans and put the property on the market again in 2020. On Feb. 8, 2022, Nags Head 99 LLC purchased it from LIDL for $2 million.