WHAT TO WATCH ON TV
Stream On: Dead men running–‘D.O.A.’ and ‘Run for Your Life’

“I am the question that cannot be answered; I am the lover that cannot be lost, Yet small are the gifts of my servant the soldier, For time is my offspring, pray, what is my name?” (“My Name is Death,” the Incredible String Band)

Everybody wants to go to Heaven; nobody wants to die. But everyone will, some sooner than others. Like the protagonists of the following 1950 film and 1965 TV series. Oof! 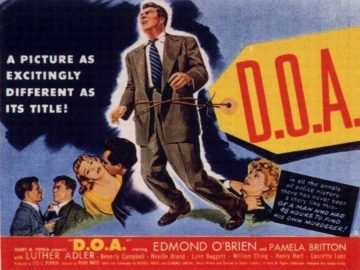 D.O.A. was pretty much the definitive film noir. A figure seen from the back, and followed by the camera through a starkly lit (and black-and-white) police station behind the opening credits speaks to a uniform cop, who gestures “that way.” He continues down another bleak hallway, with harsh lights on the ceiling illuminating thick shiny paint on the walls between heavy dark doors, and we see “Directed by Rudolph Maté.” He opens a door marked “Homicide Division” and enters. “Can I help you?” a man at a desk asks.

“In here,” and he’s led into another room where a captain is leaning back at his desk, reading a file.

“I want to report a murder.”

“Sit down. Where was this murder committed?”

The camera finally shows us the face of the complainant (Edmond O’Brien). “I was.”

The captain finds a file on his desk. “Are you Frank Bigelow?”

“That’s right.” Handing the file to an officer, he says, “That’s from the San Francisco APB. Send it direct to Inspector Bannon at Homicide. Tell them we’ve found Frank Bigelow.”

That should get you started. This great (B) movie is almost perfect in black-and-white cinematography, screenplay, direction and acting. Edmond O’Brien, usually a character actor, nailed the lead, and Pamela Britton, as Bigelow’s assistant and girlfriend, Paula, is just right: by turns plucky and vulnerable; she tries to help Bigelow put together just how and why he was poisoned. Screenplay adapted from Der Mann, Der Seinen Morder Sucht (“The Man Looking for His Killer”), a 1931 German film (hier streamen), by Russell Rouse and Clarence Greene. 88% score on Rotten Tomatoes. (I wouldn’t bother with the 1988 remake.)

RUN FOR YOUR LIFE 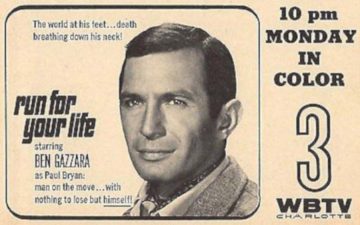 Frank Bigelow, in D.O.A., was laid low by a poisoner, but Paul Bryan (Ben Gazzara), the protagonist of Run For Your Life, is the victim of chronic myelocytic leukemia (the producers had to search for a disease that was incurable but would not have any immediately debilitating symptoms). When Bryan hears the diagnosis in the pilot (a 1965 episode of Kraft Suspense Theatre, (which stands alone pretty well—except for the resolution of Bryan’s situation), he decides to spend his remaining time traveling the world. He remarks that he hadn’t taken a day off since he left law school. “I guess I’ll try to squeeze thirty years of living into one. Or two.” He lights out for the French Riviera, and with nothing to lose, falls in with a group of adrenalin junkies, one of whom (Katherine Crawford) quotes Nietzsche: “Live dangerously.”

The pilot, aka “Rapture at Two-Forty,” has exotic locations, ex-pat Americans, Eurotrash, Michael Rennie, and bossa-nova by Brasil 65. Bryan’s diagnosis prompts him to a recklessness that even his new friends find disturbing, and Ben Gazzara could really play “charmingly arrogant.”

Another rare one. Like Game, Set and Match, it apparently was never offered on VHS, DVD, or to stream. But it’s been recorded, presumably from reruns, as home recording of TV shows wasn’t around in 1965. (I’ve had some luck by searching for the episodes’ titles on YouTube. DVD Planet Store in Pakistan has it listed, but the website also says “Please note that a product being listed on our website does not necessarily mean it is in stock and readily available for order.”)

The series, like the pilot, is thin gruel in the 21st century; it seemed better to a sixteen-year-old viewer, although Gazzara’s attitude still covers a multitude of weaknesses in the presentation.