‘Shattering the silence around suicide’

Sept. 27 Town Hall to bring subject out of the shadows 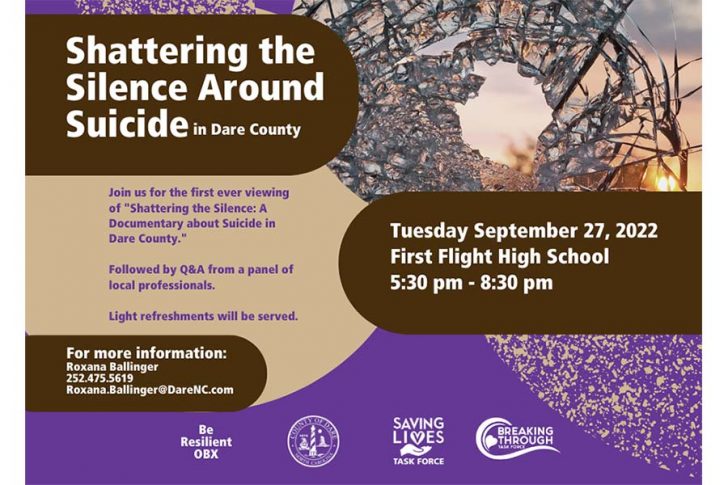 On Sept. 27, leaders of several Dare County groups hope to put a spotlight on a public health issue that often stays in the shadows.

That will take the form of a Sept. 27 Town Hall at First Flight High called “Shattering the Silence around Suicide in Dare County: You Are Not Alone.” One highlight will be the screening of a documentary about suicide featuring county residents speaking about how suicide has impacted their lives. Afterward, attendees will have an opportunity to ask questions of mental health experts during a panel discussion.

The Saving Lives Task Force, the Breaking Through Task Force, Be Resilient OBX and the Dare County Department of Health and Human Services have organized the event.

Kelly Nettnin, chair of the Breaking Through Task Force, hopes attendees will “be touched by the people who so graciously shared their stories, and I hope they’ll come out with hope as well, and knowing what types of resources are out there.”

Nettnin noted that she has received “a lot of feedback where people say it’s not a problem here in Dare County.” But the statistics say otherwise. Dare County has a 44% higher suicide death rate than the statewide rate, according to the county’s 2021-2022 Community Health Needs Assessment. Dare County’s suicide death rate is 19.3, while the North Carolina rate is 13.4 per 100,000 residents. Suicide is the eighth leading cause of death for residents of Dare County, according to the same assessment.

Among the county’s most pressing needs identified in 2021-2022 Community Health Needs Assessment are mental health and substance abuse and Dare County identified those two issues as priority areas.

“Suicide, mental health and substance abuse — all three of those things go hand-in-hand,” said Roxana Ballinger, co-chair of the Saving Lives Task Force. “Suicide is a part of that, so that’s why we decided we needed to do a town hall. There’s a lot of stigma associated with suicide, so we wanted to bridge the gap in regard to that subject matter.”

One clear goal of the event is to try and remove that stigma.

Nettnin explained that some people fear using the word, “suicide” because they think saying it aloud propels people toward the act, something she calls a “huge common misperception… Sometimes saying that word is a relief for them. They’re able to put a name to it and [are] able to start being real in this conversation.”

Another goal is to break down any barriers preventing individuals from receiving help. “If it’s fear of judgment, we want to put the message out there, so they know they’re not alone,” Nettnin said. “When you don’t feel alone, you’re more likely to reach out for help. It’s ok to not be ok, and there is help available.”

“Our community does rally together to support people when times get tough, and people shouldn’t be afraid to reach out for help,” declared Susan Lee, a licensed clinical mental health counselor. “There’s always somebody to turn to that’s willing to help for people that have suicide ideations. Mental health is health, and it isn’t anything to be ashamed of.”

Lee, who serves as the lead person for Be Resilient OBX, volunteered to accompany videographer Benny Baldwin when he interviewed participants in the documentary. Organizers reached out to the public for those willing to be filmed for the documentary and say they received more responses than anticipated — with ages ranging from under 18 to older adults.

“I tried to help them be comfortable as they were sharing their stories,” Lee said, adding that Baldwin “is wonderful at making people feel comfortable too.” She said that several of the documentary volunteers said they were participating because they wanted “to help break that stigma” where it isn’t socially acceptable to talk about it.

One important new resource is the 988 National Suicide Prevention Lifeline, which just went live in July. People can call, text or chat that number to have a conversation in their chosen format with a trained counselor, according to 988lifeline.org. Other resources include private providers and the local mobile crisis team.

Organizers stress the importance of ensuring people have help in crisis situations. “I think when people are at their lowest point, all they can see is how bad things are,” Lee said. “If we can get people to have hope to get through this period, then they can see what good things are ahead of them.”

She then shared an anonymous quote that resonates with her: “Suicide doesn’t end the chances of life getting worse; it eliminates the possibility of it getting any better.”