WHAT TO WATCH ON TV
Stream On: At the races with ‘Grand Prix’ and ‘Le Mans’

The great Argentinian racing driver Juan Manuel Fangio was asked by a reporter why, given that many drivers die in their cars, he wasn’t afraid every time he got into his car. Fangio replied, “Well, don’t most people die in bed? Aren’t you afraid to go to bed?” 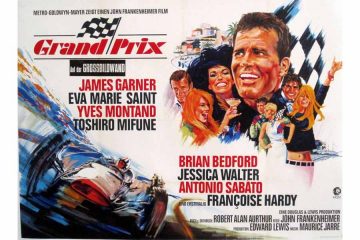 “Simply racing a Formula One car is an achievement.” (Sebastian Vettel)

Formula One stands at the technological pinnacle of all motorsport. It’s the richest, most intense, most difficult, most political, and most international racing championship in the world. Most of the world’s best drivers are either there or aspire to be there, and the same goes for the best designers, engineers, engine builders, and so on.

The cars are single-seat, open-cockpit, open-wheel cars, with an engine positioned behind the driver, designed for a low center of gravity. The highest speed attained as of 2022 is 231 mph; this is rare, as the tracks on which they race are full of turns, but the power is there.

In 1966, the year of Grand Prix, the cars weren’t as safe as they are now (relatively safe; drivers still occasionally lose their lives in crashes), but average speeds were still in the 150-mph range. So, forget car-chase movies; Grand Prix, and below, Le Mans, are the next best things to being trackside. The drama writes itself.

Grand Prix contains a fictional plot, but the focus is on the races, intentionally or not. It opens on the start of the most famous of Formula One venues, The Grand Prix of Monaco, held yearly since 1929 on the closed-off public streets of Monaco, the only remaining F1 venue not run on purpose-built tracks.

Director John Frankenheimer seemed to have two modes for this film—for the racing action, full engagement, with artistic shots, split screens, all the arts of 1960’s film-making. These scenes are can’t-take-your-eyes-off-the-screen compelling; the rest of the movie, not so much. I confess to being a little impatient for the next racing scenes, in spite of the talented actors, but that might be just me. 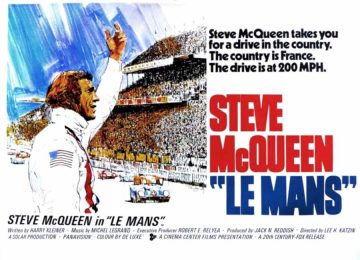 “This is a professional blood sport.” (Michael Delaney)

Behind the scenes at Le Mans was almost as dramatic as the action in front of the camera. Steve McQueen, who had turned down the lead in Grand Prix (McQueen and Grand Prix star James Garner both enjoyed auto racing in real life) and director John Sturges (Gunfight at the O.K. Corral) planned a film in 1966 to be called “Day of the Champion.” Difficulties in putting it into production saw it shelved until 1970, when McQueen’s own production company teamed with Cinema Center Films to film it as “Le Mans.” When Cinema Center found the progress of the shoot too slow, and also wanted to replace McQueen with Robert Redford, Sturges quit, saying he was “too old and too rich” to put up with it.

Lee H. Katzin, a TV director (Mission: Impossible et al.), was brought in, McQueen signed away creative control, and the resulting film is still considered one of the greatest auto-racing films ever made.

Le Mans was filmed on location during the 1970 “24 Hours of Le Mans” and incorporated footage from that race; McQueen had intended to race a Porsche with British racing driver Jackie Stewart, but their entry was not accepted, so footage of McQueen as “Michael Delaney” was shot and spliced in. McQueen’s production company entered the car that McQueen had recently placed second in the “12 Hours of Sebring,” with three movie cameras mounted to capture POV race action; it was driven by Porsche drivers Herbert Linge and Jonathan Williams.

Additional footage of cars racing and crashing to further the plot was filmed on the track after the race concluded.

The story is told cinematically, with a minimum of dialogue; much of it coming from the race announcer, in English, French, German and Italian. The plot: “Michael Delaney (Steve McQueen) is a Porsche driver haunted by the memory of an accident at the previous year’s race in which a competing driver was killed. Delaney also finds himself increasingly infatuated with the man’s widow (Elga Anderson)” (TheMovieDB.org). A simple story, like that of Grand Prix, but brilliantly told, and leavened by the compelling race action recorded by fantastic camerawork.

I have no reservations about this film; it’s another prize in my personal collection.