It’s in her blood: Lavern Davis Parker traces the history of boat building in Dare County 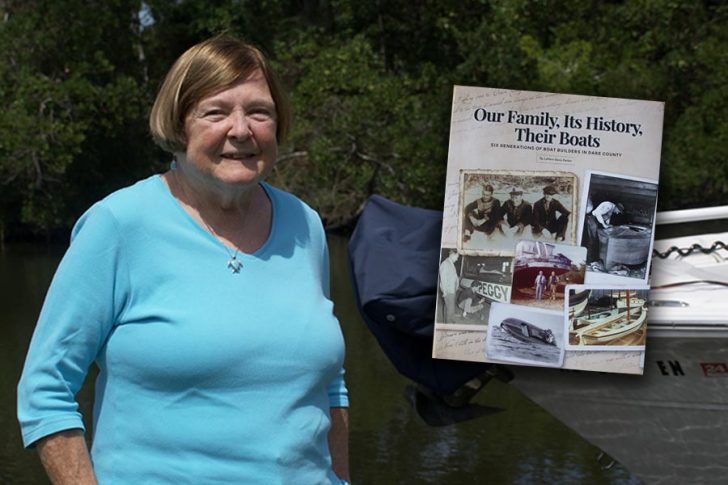 Her cousin Buddy Davis built sport fishing boats with the Carolina Flair and made sure the world knew about the design. Her father, Vernon, and uncle, Carson (Buddy) Davis, built some of the most successful racing boats in the country in the 1950s and 60s.

But it goes deeper. Parker can trace her family roots in a direct line to George Washington Creef, Sr., the boat builder largely credited with creating the shad boat— now the state boat of North Carolina.

Parker, a historian by inclination and training, taught history and geography in public schools and at the College of the Albemarle. She sat down to write the book of her family’s history of boat building and Our Family, Its History, Their Boats is an extraordinarily detailed and fascinating journey tracing the history of boatbuilding in Manteo.

When Parker first thought of writing a book she believed her father’s and uncle’s race boats would be the focus. And the story of their triumphs and how they dominated boat racing, especially on the East Coast, is a major part of the book. But Parker realized that was only part of the story.

“I’ll just do this [book] on my father and uncle’s race boats,” she said. “Then I thought, no. The boat building in their DNA is from the Creefs, so I’ll go back and research as much as I can on the Creef family. And that will add to my knowledge to move on with the boat building.”

It was the beginning of an eight-year quest that took Parker and her husband Roy to New Orleans and included hours at the Outer Banks History Center.

Her research on the Creefs, George Washington and his sons George Washington Jr. and Benjamin Howard, revealed a robust family business that included a railroad system to move materials around downtown Manteo.

“Creef and Creef Railways was owned and operated by the brothers, Benjamin Howard and George Washington Creef, Jr.,” she writes in her book under a caption of a boat resting on the rails. The railway was destroyed in a 1939 fire that burned much of downtown Manteo. Discovering how extensive the Creef Boatworks were surprised Parker.

“I never realized how important that business was to downtown Manteo,” she said. “I think Manteo needs to express more interest in the boat building industry because it was extremely important to the history of the town.”

There is also a chapter on the Manteo Boat Building Company, the WWII firm that was formed to build boats for the Navy.

The company’s shareholders, incorporated just before the United States entered WWII, included some of the most prominent people citizens of Manteo, including Parker’s father Vernon and Uncle Buddy. Over the next four years, the company built 67 boats for the government, including a number of 105-foot and 83-foot patrol boats.

The company, though, did not survive past the end of the war. From the outset, it was undercapitalized and although it provided good paying jobs, after the wartime contracts stopped, earlier financial decisions by ownership doomed the company.

The book contains remarkable details about the early days of boatbuilding on Roanoke Island. But it’s clear that Parker’s real love is for the racing boats and hydroplanes her father and uncle built and raced.

As teenagers Parker’s father and his brother, Uncle Buddy, were already building racing boats. Their first boat used a Model A engine with an external propeller to power what she describes as a “hydro scow.” It was 14 feet long and 5.5 feet wide and was capable of doing 30-32 miles per hour.

Their next boat was an 18-foot racing boat that won its first two heats in 1937, racing in the Virginia Dare Memorial Regatta on local waters. Over the next three years, the boat continued to do well throughout the East Coast until WWII fuel restrictions ended boat racing until 1946.

After the war the Vernon and Buddy expanded what they were doing, building a number of race boats — and their boats kept winning trophies. There was the Peggy and the Me2. Then the Challenger and Who Cares and others.

One of the things that really enriches the book is the time and effort Parker put into talking with the owners of the boats, and in some cases, the people who piloted them.

She saw a picture from New Orleans of one of her father’s boats, and after asking the New Orleans Powerboat Association who owned it, she found the pilot was still alive.

“He’ll be eighty-eight and he was a treasure trove of information,” she recalled. “No papers or anything in front of them. Every question I asked him, he answered…but nothing was incorrect,” pointing out that as a history major, “if you tell me a story, I’m going to check the accuracy of it.”

Racing boats, she recounts, were almost the death of her father. He was thrown from one and his injuries were severe. But that didn’t stop him.

“I don’t think he ever realized how lucky he was to be alive…it didn’t stop him from getting back in a boat,” Parker said.

“He let me race the boat that he was thrown out, which was surprising to me,” she added. “I have that in my system. It’s very, very dangerous, but exciting.”

Our Family, Its History, Their Boats is in some Outer Banks businesses or may be ordered from the author at levernp@yahoo.com.