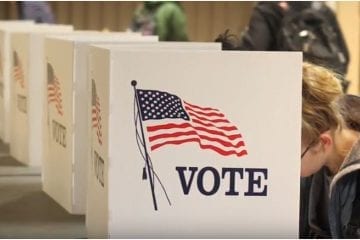 A dispute between the North Carolina Board of Elections (NCBOE) and the North Carolina Rules Review Commission over partisan election observers this fall is highlighting tensions over possible Election Day activities and generating national and even international headlines.

At its core, the dispute pits concern about voter intimidation against calls for the vigilant vote monitoring.

On Aug. 16, the NCBOE, which consists of three Democrats and two Republicans, voted unanimously to clarify some rules governing the observers’ conduct at polling places, matters such as how close they can stand to voting machines.

At the time, NCBOE attorney Paul Cox expressed the view that “most partisan observers” conduct themselves properly. But he added that “we want to avoid any disruptive issues going forward, especially given how these incidents seem to have recently surfaced in significant enough numbers to cause our county [election] directors concern.”

An NCBOE release announcing that vote stated that in reviewing the May 2022 primary voting, county officials had “documented instances in which partisan observers were disruptive to the orderly conduct of voting,” engaged in activities that ranged from “attempting to go into the ballot-marking area or behind voting equipment” to “following poll workers to their cars and filming them…”

But on Aug. 25, the Rules Review Commission — a 10-member group appointed by the Republican-dominated state legislature — rejected the NCBOE’s rule changes for election observers. A story by the Associated Press quoted the commission’s legal counsel as concluding that those rules were “not reasonably necessary” and “ambiguous and unclear.”

That action was applauded by the North Carolina Republican Party, which issued a release stating that “the rules proposed by State Board of Elections would have made it harder for North Carolinians to observe elections and for election officials to carry out their duties…With this decision, the Rules Review Commission has emphasized the importance of strictly adhering to the law as opposed to allowing the administrative state to run wild and free.”

The commission’s ruling then prompted this Sept. 2 response from NCBOE Chair Damon Circosta declaring that “The Rules Review Commission lacks the expertise and the authority to determine how to best maintain order at the polls. However, we do not have the luxury of time to go back and forth with the Commission or the courts to ensure that our reasonable rules are put in place before voting begins.”

In that vein, the NCBOE statement concluded by saying that “we at the State Board will do everything we can to ensure that the county boards of elections and county poll workers understand their authority and procedures to maintain an orderly and safe voting environment for all voters. It is our duty to the voting public to protect their right to vote, and it will be protected.”