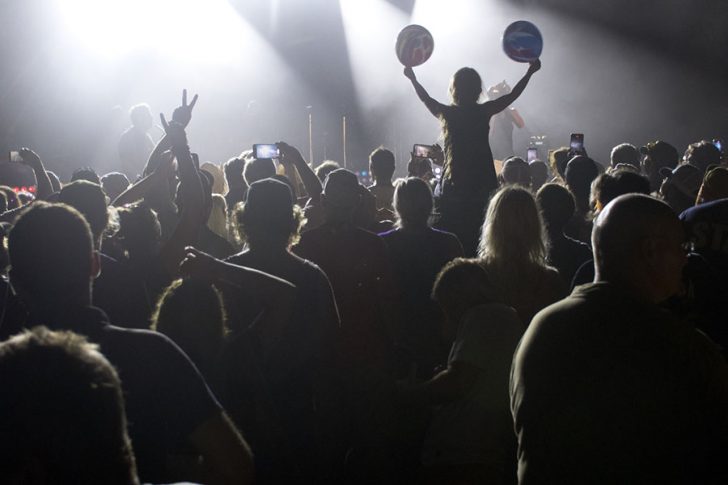 The summer of 2022 was a memorable one for music on the Outer Banks. National touring bands and musicians were here almost every week. Stanley Jordan and Keller Williams played the Tap Shack in Duck. And they were not the only national touring musicians to display their talents here.

But if there was one promoter that stood out this summer, it was VusicOBX and the music they brought to Roanoke Island Festival Park (RIFP). The bands represented just about every style.

The season closed out with the hard rock and blues of Gov’t Mule and the high-energy, genre-bending sound of Trombone Shorty & Orleans Avenue. Along the way, there was some bluegrass with Greensky, and the alternative country and bluegrass of Old Crow Medicine Show. There was reggae from Slightly Stooped and the Movement; the music of Umphrey McGee that doesn’t fit neatly into any specific style of music. And there were other others.

There were 14 VusicOBX shows this year; 12 at RIFP and shows at the Outer Banks Brewing Station and Jack Brown’s. Their first shows here were in 2021—a Hotel Festival at the Hilton Garden Inn in April of that year.

For Vusic owner Rebecca Meyers and her husband Brad, who owns Outer Banks Deli Provisions, the sounds they brought to the Outer Banks this summer seemed like a natural progression from their love of music and live shows.

“We were experiencing the stay-home, social-distancing, quarantine life during the summer of 2020 [and] we saw a video online of a socially distanced concert in Europe that had people on hotel balconies watching a concert down below. We began to dream of throwing one here and the Hilton Garden Inn popped into our minds,” she told the Voice.

“We’re just big music lovers., Rebecca told the Voice. “We’ve been to a bunch of shows and festivals. So we have been immersed in the reggae community…and then somewhere along the line, we were introduced to an agent.”

But the progression from music lovers to successful promoters was a bumpy road. As COVID restrictions gripped the nation, live music on the Outer Banks, as was the case everywhere, simply stopped. Mike Dianna, whose Mustang Music Festivals were a regular spring and fall feature, stepped back from the entertainment business.

In addition, Rebecca and her husband were influenced by the death of Ravann Horton and Ravann’s son Sebi, who died in a house fire in May 2020.

“Our community suffered the tragic loss of Ravann and her son, Sebi. She was owner of RAVRA Productions and brought reggae music [to the Outer Banks]. Sebi was also in the Mustang Outreach Program, where our son performed for years. At the same time, Mike Dianna, an amazing local promoter, was going back to his love of the restaurant business,” she said.

After the Hilton festival, it was clear there was a pent-up demand for live music. “Everybody was begging for more,” she explained.

COVID restrictions were lifting, but Rebecca and Brad knew people still weren’t comfortable being inside. And when they started looking for an outdoor venue, Roanoke Island Festival Park seemed to fit the bill.

“Where can we have a show now that the restrictions are lifted, where people can come to the show and not feel crowded? That was one of the big things that we liked about the park. I mean, aside from seeing the water in the background and how beautiful it is,” Rebecca explained.

There was another factor in RIFP’s favor, something that is apparent at all the shows.

The RIFP experience, she added, has been about “definitely bring the family…kids are free. We love that, to see the kids on the [parents] shoulders and knowing the parents can come there in a safe environment.”

“I think it’s great to see families together. I think we’ve probably had some children who have come this summer and they’ve seen their first concert and they’ve seen it with their parents or their brothers and sisters,” she said.

Rebecca notes that the reggae bands VusicOBX brought to the park reflect her and her husband’s love of that music genre. The first concert they booked last year at RIFP was Sublime with its very unique reggae sound.

But she makes it clear that the VusicOBX shows have been and will be showcasing a full range of musical styles.

“We don’t want to get pigeonholed,” she said, although it’s clear what is most popular. “We noticed that reggae and country are super popular here. The jam bands and other genres, bluegrass, even with the Bluegrass Festival, they just didn’t move. They were still positive experiences.”

The Vusic OBX events create a festival atmosphere, with local vendors invited to the grounds to set up tents and food trucks lining the perimeter That idea is in keeping with the concept of the Mustang Music festivals that Mike Dianna promoted before COVID.

Right now, Rebecca and Brad are taking a few deep breaths before jumping into the future. But that future, Rebecca makes clear, includes more shows.

“It’s exhausting and a labor of love but it all comes together on show day when we see smiles on faces and hugs all around,” she declared. “…Music is healing and brings people together of all different walks.  We hope to continue bringing these experiences to the Outer Banks.”