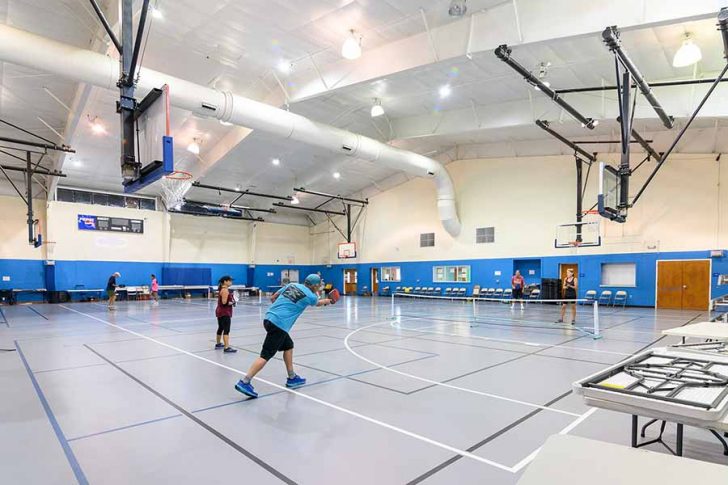 The growing pickleball community in Dare County made its presence felt at the Sept. 6 meeting of the Dare County Board of Commissioners, where seven residents spoke during public comment asking for more courts as well as better access to county recreational facilities during evening and weekend hours.

Pickleball, an indoor and outdoor sport that combines elements of tennis, badminton and ping pong and uses paddles and a ball on a 20×40 court with a net, was named the fastest growing sport in the U.S. in 2021 and 2022 by the Sports and Fitness Industry Association.

The sport’s popularity has reached Dare County, where there are more than 300 active players and their numbers are increasing, one speaker, Dave Briggman, told commissioners during the meeting. Many players live on the beach, he said, “where there are three outdoor courts and I’ll say zero to six indoor courts…and I say zero because not all the courts at the [Parks and Recreation Center in Kill Devil Hills] are available.”

The group’s core point, that the county needs to fund additional facilities for pickleball, was met with a pointed response by Dare County Commissioner Chairman Bob Woodard at the end of the Sept. 6 meeting. But the debate appears to have paved the way for more communication between the parties.

Briggman and others said the county’s Parks and Recreation facilities are typically not open in the evenings, on the weekends and during the summer. They also requested that some tourism tax dollars be invested in expanding recreation opportunities and recreation infrastructure.

At the Sept. 6 meeting, the Dare County Commissioners approved a Capital Improvements Plan (CIP) that included a $453,6000 line item for the year 2028 that was partially for pickleball courts, with some of that money going to other improvements at recreational facilities.

“The number of courts will be determined by how far [that funding] will go,” County Manager Outten told the commissioners. Leftover money, he added, “could be put back into the pickleball courts depending on where they are built and what other amenities are needed.”

But several who spoke at the Sept. 6 meeting said that 2028 was too long to wait, arguing that a dedicated gym for sports such as pickleball, basketball and volleyball is sorely needed in the county.

“We can’t wait two, three, four years down the road,” Briggman told the commissioners. “The county has one of the highest revenues per resident ratios in North Carolina. We seem to have no problem spending capital money on other things. Now is the time to change the budget, now is the time to build new recreation facilities and pay the employees to keep those facilities open.”

Another speaker, Scott Morton, talked about the need for more access to recreational facilities. “Adult recreation, in general, in Dare County is at a minimum right now,” he said during public comment. “And there are many things that we can do with existing facilities that would take very little money…example number one would be opening up the [Parks and Recreation Center in Kill Devil Hills] on the weekends for adults to play pickleball, basketball, volleyball or any other sports you might be able to play on a court.”

Morton estimated that opening the Parks and Recreation Center for three hours on Saturday and three hours on Sunday would cost the county less than $15,000 a year and result in a 40 to 50 percent increase in the use of the facility.

In response to public comment, Dare County Board of Commissioners Chair Bob Woodard offered a sharp rebuttal at the end of the meeting. “To those who say that we don’t care about our senior citizens, as one individual said, really irritates me…I’m a senior and I’ve got plenty of places to go in this county if I want to do something.”

Woodard also argued that according to Dare County’s pickleball schedule, there were 132 hours of pickleball time outdoors and 66 hours indoors during the month of August.

“I’m sorry, but there’s plenty of places to play pickleball in Dare County, and if it ain’t in your backyard, get in your car and drive for thirty minutes to find a place to play,” he concluded.

For his part, Scott Garber of the OBX Pickleball Group took issue with Woodard’s calculations. “If you get three courts with 50 people and 138 hours over the month, that gives everybody 22 minutes a day to play pickleball,” he told the Voice in an interview. Garber pointed to Wilson County, N.C., which is home to the largest pickleball complex in the state, as a good example of how to build sports tourism in a community using tourism tax dollars.

And despite the comments by Woodard at the conclusion of the meeting, Garber said a follow-up conversation with several commissioners, including Woodard, has opened up communication between the board and the pickleball community.

“Out of that [conversation] came an understanding so we can have further dialogue,” he noted.