WHAT TO WATCH ON TV
Stream On: Children can be nasty, don’t you think?

In 1949, in the midst of a national debate about improving the French reform-school system, Radiodiffusion Française commissioned writer Jean Genet to write about his experience as a juvenile delinquent. When the novel The Bad Seed was published in 1956, the notion of criminal children took root in popular fiction as a particularly scary trope. 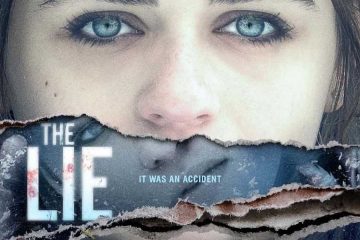 When parents find out that their child has committed murder, what does that feel like? Did we not raise her right? We did the best we could! But if we did raise her right, does the fault lie in the genes that we passed along to her?

Divorced dad Jay (Peter Saarsgard, Dopesick) is driving his daughter Kayla (Joey King, Fargo, season one) to a ballet retreat when they see Kayla’s friend Brittney, who’s going to the same retreat, on the road, and pick her up.

On the way, Brittney announces that she must go to the bathroom; it’s an emergency, and Jay must stop the car! He pulls over, and Brittney dashes into the woods, with Kayla close behind. After a time Jay hears a scream and rushes out towards where they had gone, and finds Kayla in tears sitting on a bridge over an icy river.

“It was a mistake,” she screams. Kayla tearfully tells her father that on an impulse, she pushed Brittney into the river. He runs down to the bank but can’t find her.

It’s when Jay brings Kayla back to her mom’s house, and they agree to stay quiet, that things get really strange. What’s especially troubling to her parents is that Kayla, after her tearful confession on the bridge, has apparently forgotten the deed; at least she shows no remorse, while Jay and Rebecca, her mom, tie themselves into knots in front of their friends (and a detective) to try to explain Kayla’s disappearance.

Kids! Am I right? 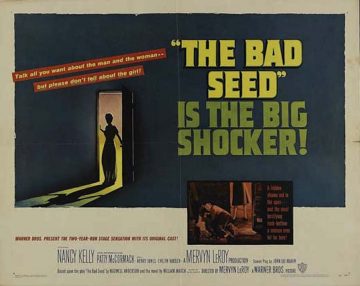 Back to The Bad Seed. The 1954 novel established the pattern of the “evil child” novel that was to become one of the most popular subgenres in contemporary dark fantasy. It was adapted to stage and then in 1956 to this film, directed by Mervyn LeRoy.

The duplicitous opening credits play over a background of a gothic storm on a lake with lightning and thunder, although the music is lively and upbeat, such as we might hear in an industrial training video. Then we are taken to sun-drenched 1950’s suburbia, where Kenneth (William Hopper) and Christine Penmark (Nancy Kelly) dote on their eight-year-old daughter Rhoda (Patty McCormack). Rhoda, pristine and proper in her pinafore dress and blonde pigtails, tells their landlady about a penmanship competition that she lost to her schoolmate, Claude Daigle, before she leaves for her school picnic at the lake.

Mixed signals abound: in the cheery suburban town, the landlady speaks of her brother meeting the train to welcome “the speaker at our psychiatry club” (where they gossip about crime and famous murders). Kenneth is about to be deployed (he’s an army officer) and the landlady says to him, “Do something about not having a war. I’m not ready to be turned into a piece of chalk just yet.”

Kenneth picks up Rhoda and hugs and kisses her. “See my effect on girls,” he says, before he and Christine share an inappropriately passionate good-bye kiss on the lawn. As he drives off, the music turns foreboding as Christine re-enters the house, where Rhoda is modeling a pair of sunglasses with rhinestone rims, a gift from the landlady. It’s all very creepy.

Later, Christine is having lunch with friends when they hear a radio report that a child has drowned in the lake. Claude, who had won the penmanship medal. Christine worries that her daughter might be traumatized, but Rhoda, like Kayla in The Lie, is unfazed by the incident and goes about her life.

When Christine finds the medal in Rhoda’s room, she demands an explanation. Rhoda lies that Claude let her have it. A teacher had told her that Rhoda had been following the Daigle boy around and snatching at it.

Meanwhile the “psychiatry club” discusses the “changeling fantasy, the commonest of childhood,” and Christine talks about her own suspicion that she was adopted. Christine’s father and the guest speaker have a spirited argument about whether killers are born or made, before Christine learns from her father, a newspaper reporter, that she had indeed been adopted; her mother was an infamous serial killer about whom her father had written.

If it wasn’t a party before, now it is, between the red herrings and nature vs. nurture arguments. And is it over for Rhoda? Nancy Kelly’s scenery-chewing, and to a lesser degree, Patty McCormack’s, is worth the price of admission.