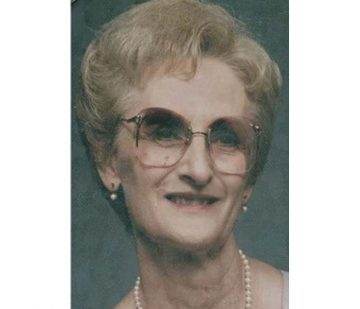 Frances Russell Jeffries, age 93, of Elizabeth City, NC died on Sunday, September 11, 2022 at Brookdale Assisted Living. She was born in Ness City, KS, the daughter of the late Roy D. Russell and the late Ione Timken Russell McGuire. She was the widow of Robert G. Jeffries.

Growing up in Greeley, CO, she graduated from St. Anthony Hospital School of Nursing in Denver, CO. While a civilian nurse in Carswell Air Force Base in Ft. Worth, TX she met and married her husband, Bob. They came to Elizabeth City in December 1957. She was a member of Blackwell Memorial Baptist Church and the Esther Sunday School Class. In the 1960’s and early 1970’s Frances was active in the Town and Country Extension Homemakers Club. She was a stay-at-home mom while her sons were growing up, then employed with College of the Albemarle’s Associate Degree Nursing Program. She felt this was the most enjoyable and satisfying of her career.

Frances and Bob were active members of the River City Good Sam RV Club, traveling thousands of miles with their 5th wheel RV trailer during their retirement years. Frances often said, “We were blessed. Our lives were blessed.”

She is survived by two sons, Mark Jeffries and wife, Arlene, of Fayetteville, NC and Tracy Jeffries, and wife, Laurie, of Elizabeth City, NC; grandchildren, Dr. Jared Jeffries, Ashton Ferrell (Dane), Victoria Wilson (Brian), and Chris Jeffries; and five great-grandchildren. She was preceded in death by a son, R. Greg Jeffries, and a brother, Ray Russell.

A funeral service will be held at 2:00 p.m. on Wednesday, September 14, 2022 at Twiford Memorial Chapel with the Rev. Don Carter officiating. Burial will be in West Lawn Memorial Park Cemetery. The family will receive friends from 6:00 to 7:30 p.m. at the funeral home on Tuesday evening, September 13, 2022 and at other times at her residence. Memorial donations may be made to Blackwell Memorial Baptist Church, 700 North Road, Street, Elizabeth City, NC 27909.

Twiford Funeral Home, 405 East Church Street, Elizabeth City, NC 27909 is serving the Jeffries family. Condolences and memories may be shared at www.TwifordFH.com.   The service will be live streamed at www.facebook.com/TwifordFuneralHome.

To plant a tree in memory of Mrs. Jeffries or send flowers to the family, please visit www.TwifordFH.com/send-flowers.