Sharks hauled in from waters off Colington 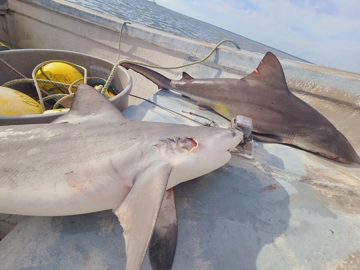 There have been increasing encounters between humans and sharks in the waters surrounding the Outer Banks in recent years, a trend largely attributed to warming waters. And here’s another example. These two bull sharks were caught in a fishing net in Buzzard Bay, just south of Colington Island, over the past weekend.

One relevant report in 2018, used combined studies by the N.C. Division of Marine Fisheries, East Carolina University and Simon Fraser University and was published in  Nature.com. The data documented the “dramatic rise in the number of bull sharks using the Pamlico Sound as nursing habitat,” according to a Voice story.

The Nature study reported that the findings “suggest that increasing water temperature and salinity have allowed Bull Sharks to expand their nursery habitat. This shift will have unknown, but potentially strong, impacts on both the local ecosystem and interactions with humans.”