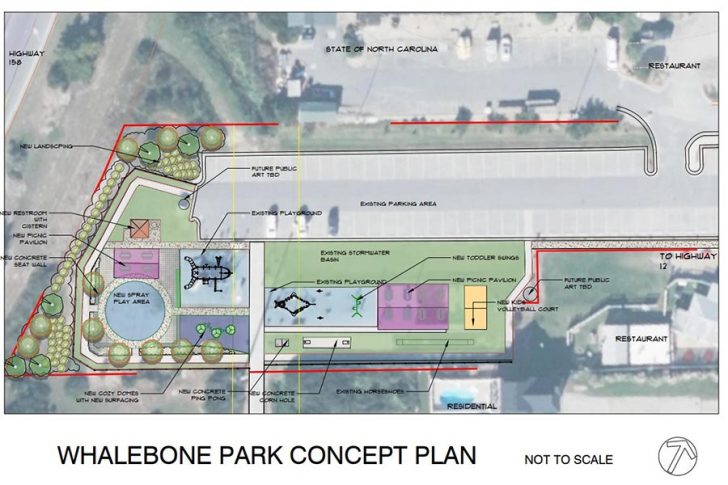 The Town of Nags Head plans to seek a $250,000 grant this fall through the North Carolina Parks and Recreation Trust Fund (PARTF) to aid in its effort to expand Whalebone Park and Playground to include a new spray play area. The new plans also incorporate additional shaded picnic pavilions, ping pong and cornhole courts, and restrooms.

Whalebone Park, located just south of Sam & Omies Restaurant and adjacent to Jennette’s Pier at milepost 16.5, was built in 2013 as a nautical-themed playground that also has picnic tables and bocce and volleyball courts.

While the town was unsuccessful earlier this year in securing one PARTF grant, it has identified a PARTF grant opportunity called the Accessibility for Parks (AFP) grant, which provides $10 million in parks and recreation grants to benefit children and/or veterans with disabilities.

“We feel like [the grant] is a good fit for the spray play area,” Deputy Planning Director Kate Jones told the Planning Board during its Sept. 20 meeting. “The whole concept of that play area is universally accessible, so it’s going to be something that everyone can enjoy and use.”

Jones said that in consultation with the town’s PARTF representative, there have been some slight revisions to the overall site plan to improve its chances of being awarded the grant. One of those changes was to relocate the volleyball court and design it as a child’s sand court. Another change was to incorporate stand-alone play domes, which are considered universally accessible, instead of a sand play area.

This spring, town staff held a public meeting to get input from community members about the renovation of Whalebone Park. Those who participated indicated that preferred park elements included the spray area, along with restrooms, shade and ADA (Americans with Disabilities Act) playground equipment. Staff also put out an online survey to get public input and received 64 responses.

Jones said there will be more public outreach prior to submitting the application, adding that the town would also seek an Outer Banks Visitors Bureau grant to fund the restrooms at the site.