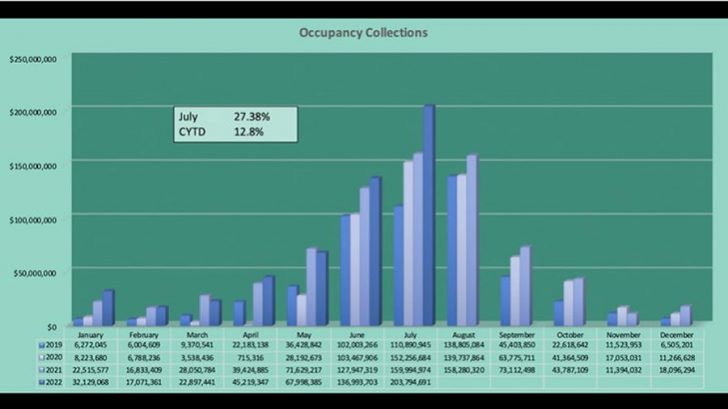 In reviewing the data during his recap of the Sept. 15 Dare County Tourism Board meeting, Nettles reported on “the historic” occupancy collection numbers that showed a jump of 27% in July 2022 compared with July 2021. That’s the first time that occupancy numbers in any month surpassed the $200 million mark, coming in at $203.8 million. For the year to date, 2022 occupancy collections are up 13% over the previous record-setting year.

But Nettles added a significant point of context after reciting those numbers, noting that “we do see that a lot of these increases are driven by price changes, rate changes rather than number of people. In some cases, we’ve seen drops in the number of people as evidenced by some decreasing numbers in other lodging segments.”

In an interview with the Voice back in May, Nettles acknowledged that the county’s optimal capacity for tourists, in terms of sheer numbers, has already been reached, and even exceeded.

“The level of visitation that we’ve had in the last year and a half is not necessarily sustainable,” he said, “particularly when you combine it with a limited workforce and some of the other challenges we’ve got…There’s a price for that growth. The impacts of tourism are both positive and negative.”

In his summary of the Sept. 15 tourism board meeting, Nettles also reported that meals collections for July were up 9% over July 2021, at $61.1 million, with a year-to-date increase of a little over 6%.

Click here to watch the Dare County Tourism Board Recap.