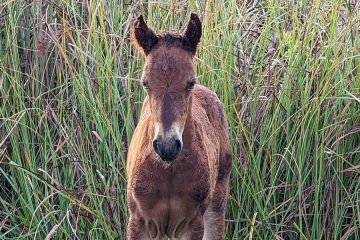 On the morning of Sept. 23, the Corolla Wild Horse Fund posted this sad news with a recap of the efforts they made to save the horse. Here is an excerpt from the announcement.

We have some devastating news to share this morning. Late last night, we made the difficult decision to euthanize six-week-old filly Ceres due to a very severe case of pythiosis. She was in the same harem as June, the mare who is currently at NC State being treated for the same infection.

Ceres was seen by one of our staff on Saturday, Sept. 10 with no visible wounds and was behaving normally. The following Monday, Sept. 12, at around 8 a.m., staff saw her again and a lesion had developed on top of the coronary band of her right front hoof. We immediately contacted our vet, who confirmed that it was most likely pythiosis, and we spent the entire day coordinating between ourselves and the vets at NC State to come up with the best plan of action.

Since Ceres was so young, there were additional challenges that we don’t face with adult horses that require extra planning and logistics. We came up with a plan for capturing her and the hospital in Raleigh was prepared to admit her as soon as possible.

Unfortunately, after Monday the horses disappeared and despite hours and hours of exhaustive searching, we were unable to find them. Finally, this Tuesday one of our staff noticed what looked like foal hoofprints going into some very thick brush where there are no roads. She got out and walked as far as she could and was able to see the horses in the distance. Ceres was up and moving around, so we knew she was still alive and able to walk. We couldn’t get to them, but at least we knew what area to focus on.

Then yesterday, the group came out of the deep woods and luck was on our side as we were able to get them all trapped under a house. Under the advisement of our vet, our herd manager sedated Ceres and we were able to safely move the adult horses out from under the house and then get Ceres onto the horse trailer and back to the rescue farm. Our vet met us there around 9 p.m. to examine her and do x-rays.

The damage to Ceres’ hoof and the bones in her lower leg was irreparable. The infection had set into the bone and her hoof was sloughing off. She was in a great deal of pain and while on one hand it is always difficult to make the decision to euthanize, in a case like this we knew there was no other choice and that it was the right thing to do – beyond the shadow of a doubt. Ceres was laid to rest late last night next to the mares’ pasture, so that she’ll always have her aunts looking over her.

The rest of the harem is doing fine this morning. Ceres’ mother called for her during the night, but as of right now they have all settled down and are grazing quietly.

To learn more about Corolla Wildhorse Fund or to support them visit https://www.corollawildhorses.com/.