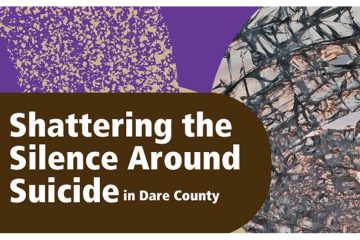 The Sept. 27 Dare County town hall on suicide featured a documentary with moving accounts from those affected by suicide, ominous warnings about the increase in suicide among young people and practical information about the reasons people take their owns lives and ways to prevent it.

The event, titled “Shattering the Silence around Suicide in Dare County: You Are Not Alone,” was held at First Flight High School and organized by the Breaking Through Task Force, the Saving Lives Task Force, Be Resilient OBX and the Dare County Department of Health and Human Services.

Nearly one in five adults in the U.S. live with mental illness, according to the National Institutes for Health, and ever since the first Community Health Needs Assessment was completed in the early 2000s, mental health has been a concern in Dare County, according to Kelly Nettnin, chair of the Breaking Through Task Force.

“It’s a complicated issue,” Collen Coyner said, referring to suicide. A retired schoolteacher who moved from Virginia to Kill Devil Hills three years ago, she was one of about 80 event attendees. Coyner was there “mainly because in my family, we’ve been touched by suicide,” and she said she was interested in potential volunteer opportunities.

Kerri Appelbaum was reading brochures from the informational tables staffed by local medical and mental health professionals prior to the documentary screening. After retiring from her career as a school psychologist in upstate New York, she moved to Corolla, where she now teaches social and emotional curriculum at the public charter school.

“Unfortunately, we’ve had our share of suicides up there [in Corolla] too,” Appelbaum said, explaining that she wanted to bring back any resources she could for the school and those families.

The documentary showed that sometimes people talk about suicide before they take action, while in other cases, there are subtle or no outward signs or symptoms at all. Examples of suicide risk factors include ineffective coping skills, no reasons for living, discrimination, stress of acculturation, historical trauma, unhealthy relationships and feeling isolated.

In the documentary and the discussions that followed, people talked about how mental illness, substance misuse, job loss, grief and criminal or legal problems can also contribute to the incidence of suicide. “It’s hard for people to say I need help; I have a problem,” Sweet Pea Tillett said in the documentary. She talked about the range of emotions she’s experienced, from anger to sadness to confusion and feeling “in the dark” after she lost her husband Michael Hauk to suicide in 2014, following depression that set in after his unexpected triple-bypass surgery.

“There’s always someone out here who will grab your hand and listen,” she encouraged viewers.

Tillett attended the event and spoke during the public comment about how she’d also lost four friends to suicide here on the Outer Banks over a six-month period in 2014 and how she is now “a testimony” that people can survive that difficult experience.

Jennifer Craddock Gilbert shared in the film that she’d attempted to hang herself and is alive because her husband got her down. Life circumstances had become so tough for her that her first words after the failed attempt were, “it didn’t work.”

That Monday, she went to work like nothing happened. “There is no greater actor or actress out there than a person that doesn’t want to keep living,” she told viewers. Her closest friends convinced her to go to an inpatient treatment center, where she got on medication for the first time. There, “it dawned on me that I’m not the only one in the universe dealing with this.”

“I wish we had something like this in Currituck,” RJ Cooper said after the event. He lost his 53-year-old son to suicide in December 2020, and it surprised and shook the whole family.

“We think about it every day,” Cooper said, tearing up.

Cooper and his wife have been raising awareness about suicide ever since, having put up a billboard in Currituck County and hosting an annual Stomp the Stigma 5K in May—their son’s birth month.

Part of the panel discussion at the Sept. 27 event included disturbing news about the incidence of mental health problems and suicidal ideations among younger people.

Dr. Ashley Clower of Surf Pediatrics and Medicine sees patients up to age 18 and has recently experienced “a huge increase” in office visits specifically for mental health reasons.

“With children it might be impulse and opportunity…not that they’ve planned it out,” Lee noted.

Proactively protecting children is key, said Christie McEwan of Outer Banks Counseling Services, who added, “When they’re showing signs, you have to do whatever you can.”

Family safety plans could include removing all knives from the kitchen; taking a child’s door off the hinges; or putting guns, ammunition and medications in lock boxes that children can’t access, McEwan said.

A Trillium Health Resources representative shared that there are free, virtual “mental health first aid” trainings on Oct. 25 and Oct. 27, which teach people to recognize and respond to mental illness and substance use disorders in either youth or adult populations, respectively.