WHAT TO WATCH ON TV
Stream On: Woody Allen, lost in translation

Last month, Woody Allen told a Spanish newspaper, “My idea, in principle, is not to make more movies and focus on writing….” But more recently, in France, working on his 50th film, he said that he had “no intention of retiring.”

That’s enough to trigger a column from me on three milestones of a great director that today everybody loves to hate. To be fair, I haven’t seen a Woody Allen movie since 2008’s Vicky Cristina Barcelona (which was … good…)—he’s directed eleven since, often in Europe, but after marrying his adopted step-daughter twenty-five years ago in the midst of scandal, America seems to have written him off. Still, if you can tune out the static, there’s plenty to love about his earlier work. 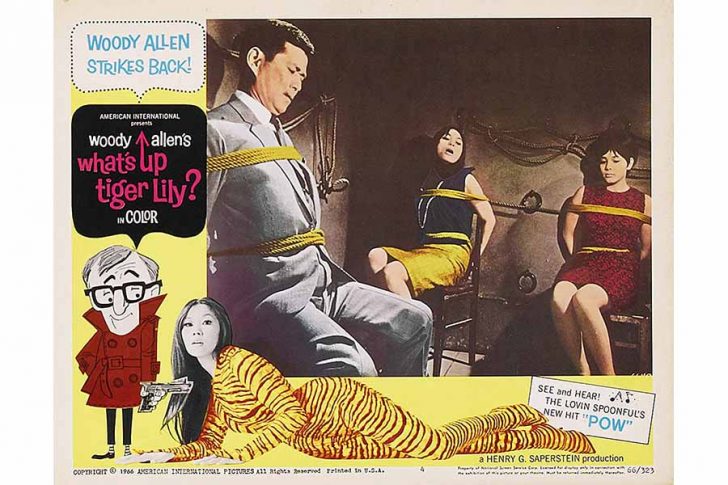 Heywood Allen (born Allan Konigsberg in the Bronx in 1935) began in show business writing material for television in the 1950s, mainly Your Show of Shows (1950–1954) working alongside Mel Brooks, Carl Reiner, Larry Gelbart, and Neil Simon. He published several collections of short stories and wrote for The New Yorker. In the early 1960s, he performed very successfully as a stand-up comedian in Greenwich Village alongside Lenny Bruce, Elaine May, Mike Nichols, and Joan Rivers.

In 1956 two shrewd businessmen named James Nicholson and Sam Arkoff founded American International Pictures, and started releasing cheaply produced but highly lucrative teen films, many directed by the legendary Roger Corman. When Dr. No (1962) started global James Bond mania, AIP started importing Japanese spy pictures and redubbing them. They didn’t bother to hire translators who could understand the source material, but wrote new lines that had no relation to the original plot, but fit the visuals on the screen. When they quickly redubbed International Secret Police: The Key of Keys and released it in late-night art houses in New York, they found that audiences were laughing in the wrong places, so AIP hired Allen, who was by then a headlining stand-up comedian. Allen teamed up with then-wife Louise Lasser and early collaborator Mickey Rose to redub the film, turning into an espionage caper based on a secret recipe for egg salad.[^]

It’s pretty disorganized, but in 1966 it fit right in with the growing “counter-culture” in which not everything needed to make sense if it was entertaining—or even diverting. At around the midpoint we’re brought back to the announcer, who asks Woody to summarize the confusing action. “No,” Woody says.

It has its moments: two agents are fighting and trash-talking, via Woody’s script: “Roman cow! Russian snake! Spanish fly!” A character introduces himself as the “Grand Exalted High Macha of Rashpur, a nonexistent but real-sounding country,” which is so new that the entire population is still packed up in crates. The chaotic action is interrupted by appearances from the Lovin’ Spoonful (who played the Outer Banks in 2014, btw), added in post-production, singing numbers here and there—not unlike the way Raymond Burr was added to Godzilla.

Today, on Rotten Tomatoes, it carries a score of 81% fresh from professional critics, but only 52% from audiences, which is mainly an indication of the naïveté of 1966 audiences, who loved it. Still it was an odd beginning for one of America’s top directors. 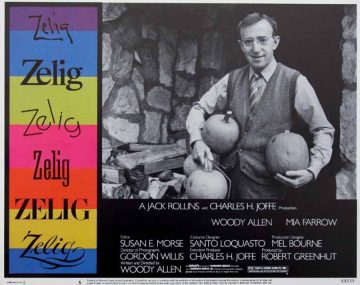 Eleven years before Forrest Gump used special effects to insert actors into existing documentary footage, Woody Allen released Zelig, the story of nonentity Leonard Zelig (Allen) who, out of a strong desire to be liked, mirrored whomever he was around, and the psychiatrist, Dr. Eudora Nesbitt Fletcher (Allen’s then-romantic partner Mia Farrow), who sought to cure him.

Zelig appears to be an autobiographical allegory and also a love letter to Mia Farrow (from whom Woody later split in the midst of notorious acrimony after having an affair with her adopted daughter, Soon-Yi Previn, before marrying Soon-Yi).

In 1984 things were still sweet between Woody and Mia, and Zelig attests to that. It’s a mockumentary comedy about the life of human chameleon Leonard Zelig, a man who became a celebrity in the 1920s due to his ability to look and act like whomever is around him. Susan E. Morse’s expert editing places Zelig in real newsreel footage of Woodrow Wilson, Babe Ruth and others, and such modern social critics as Susan Sontag, Saul Bellow and Irving Howe appear as themselves, offering their insights into the strange phenomenon of this Zelig.

The special effects are outrageous (see the trailer), the comedy is on par with Woody’s best, and the heroic Dr. Fletcher saves Zelig from himself—from this: “Zelig’s very existence is a non-existence. Devoid of personality, his human qualities long since lost in the confusion of life, he sits alone, silently staring into space, a figure, a non-person… The one who only wanted to fit in, to belong, to go unnoticed by his enemies and being loved, neither fits nor belongs, is supervised by enemies, and remains abandoned.”

HANNAH AND HER SISTERS 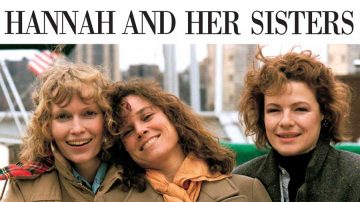 And here we are, at my favorite Woody Allen movie. Sure, 1977’s Annie Hall is the film most think of, but 1986’s Hannah and Her Sisters is to me a more mature film, and one that seamlessly blends Woody’s prodigious comedy with an affecting story of ebbing and flowing romantic relationships. With an ensemble cast featuring Woody, Mia Farrow again, Michael Caine, Max von Sydow, Barbara Hershey, Dianne Wiest (The Mayor of Kingstown), Carrie Fisher, Maureen O’Hara, Lloyd Sullivan and more, it takes place on the Upper West Side of Manhattan that was also my home then, between two Thanksgivings.

Woody’s arc in it is a great comic subplot that manages to pay homage to the Marx Brothers and the healing power of humor; the main plot concerns his character’s earth-mother of an ex-wife Hannah (Farrow) and her current husband (Michael Caine), who falls in love with her sister Lee (Barbara Hershey) as Lee’s much older, controlling husband Frederick (Max von Sydow), an artist, is having a personal and artistic crisis. Hannah’s ex-husband Mickey (Allen) fears for his life after a doctor’s checkup, and has a disastrous date with Hannah’s other sister Holly (Wiest), an ex-cocaine addict with unrealistic goals.

Similar to Woody Allen’s hero (and Max von Sydow’s frequent collaborator) Ingmar Bergman’s Fanny and Alexander, Hannah and Her Sisters is one of my very favorite movies, with a brilliant cast, great drama, hysterical comedy, in a story about everything: life, death, love, and how an existential crisis was cured by Duck Soup.

A literary friend suggested that I should check out Woody’s 2011 romantic fantasy comedy Midnight in Paris, so I’m pretty sure that sometime in the future I’ll devote a column to more recent Woody Allen films.