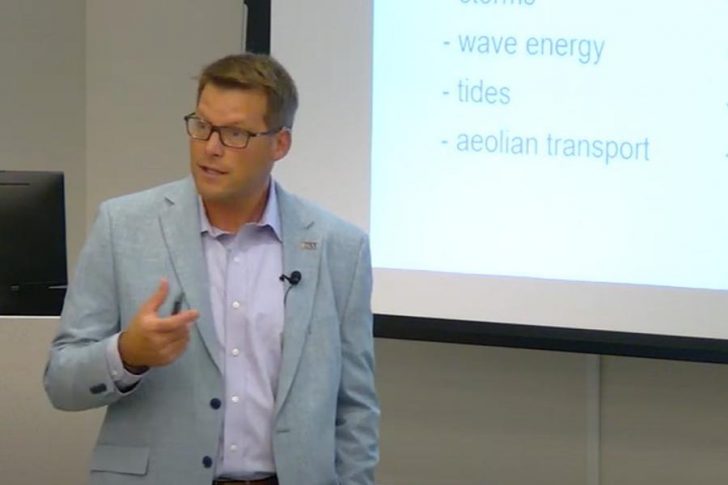 During the Coastal Studies Institute’s first Science on the Sound lecture series since the COVID-19 pandemic, CSI Executive Director Dr. Reide Corbett told those gathered that while beach nourishment is both a short-term and expensive solution to significant and worsening erosion issues, it remains an effective response to the problem.

“Our [barrier islands] are truly made up of a pile of sand. It is a sandbar that is above sea level, and we are in an area that sticks out into the Atlantic fairly far,” Corbett said to about 50 audience members at East Carolina University’s Outer Banks Campus at CSI. That, along with a rapid change in sea level today compared to a century ago and the energy driven into the system by storms, all leads to some of the challenges associated with living in a coastal system.

Among Corbett’s messages was that beach nourishment is a short-term solution and doesn’t change the dynamics of the beach, but it is adding volume and buying time.

Increasing erosion rates coupled with growing coastal populations could lead to the need for more frequent and intense beach nourishment projects in the future, he said, which could be a challenge when it comes to cost. But these projects are effective and based on recent research, don’t appear to have a significant ecological impact in the long run provided the sand being pumped is compatible with that of the beach.

Corbett said that of the 300 miles of Atlantic shoreline in North Carolina, 70 percent of it is eroding. “On average, that erosion rate sits at about three to five feet per year…but again, we have these hotspots that are upwards of ten to fifteen feet per year.” Coupled with a coastal population that has more than doubled, Corbett explained that a “coastal squeeze” is happening around the globe.

In North Carolina, where hardened structures along the Atlantic coast such as seawalls are prohibited and also environmentally unfriendly, one of the only solutions for adapting to the increased erosion rates is beach nourishment, Corbett said. “These projects are truly designed on the time scales of five to seven years – they aren’t permanent. They are not a solution to erosion [but] a temporary approach to dealing with the challenge associated with erosion.”

One of the challenges of beach nourishment, Corbett said, is the cost. This summer alone, the local beach nourishment projects funded by county and municipal revenues had a price tag of about $78 million. A collaboration between Dare County and its municipalities, along with municipalities planning projects simultaneously, have been successful so far and helped to reduce costs.

Corbett told the audience that there is a lot of science that goes into a beach nourishment project, and he noted that it is important to recognize that sand isn’t just being added to what he refers to as the “recreational beach,” but is also being added beneath sea level.

“One of the things you will see within the first several months of a nourishment project is that the beach begins to equilibrate between the bar offshore,” he said. `You might see what appears to be erosion, a loss of significant sand and say, ‘Why did we pay $10 million when it’s gone in the first three months?’ That sand has not gone, but has moved to that offshore bar,” Corbett said, adding, however, that certainly over time, sand is being lost.

Beach nourishment, he continued, is a fairly new process for the Outer Banks and really started with the Town of Nags Head in 2011. “At the time, that was the largest locally-funded nourishment project in the United States,” he said. “That’s pretty impressive for a couple reasons.”

One is that it cost roughly $25 million. But for many on the Outer Banks, that beach nourishment project offered a good lesson. “They saw not just the money it cost, not just the sand that was put on the beach, but the protection that it offered in the next several storms,” Corbett said. “And I think the town of Nags Head did a good job of showing that and demonstrating some of the protection that it did provide for infrastructure behind that primary dune.”

Corbett, who noted that the Outer Banks has significant sand resources off its coast, said that there are guidelines in North Carolina that are even more stringent than the Army Corps of Engineers regarding what sand is compatible for a beach in North Carolina.

Corbett also briefed the audience on a CSI research project conducted in Pea Island National Wildlife Refuge following the N.C. Department of Transportation beach nourishment project in 2013-2014. Noting that it’s the only study he is aware of that, from an ecological standpoint, looks at a nourishment project for longer than five years.

The study involved collecting samples from the nourished area of mole crabs, coquina clams and other animals that live in the sand, as well as tracking ghost crab burrows for about seven and a half years and comparing it to adjacent non-nourished beaches.

What CSI researchers found was that there was not a significant impact on these critters that live in the sand in the nourished area, and while there was a significant decline in ghost crabs, those numbers rebounded within a year.

Corbett credits that success to the fact that there was a good match when it came to sand compatibility.

Corbett’s presentation was followed by a discussion period in which a number of ideas were discussed, including taking a multi-structured approach to erosion. Also part of the discussion was for the possibility of developing, from a financial standpoint, a 30-50-year plan to address these challenges.

(The next Science on the Sound talk will be Dr. Chris Oakley on Oct. 27 and Dr. Mike Muglia on Nov. 17. The lectures are free of charge and open to the public.)