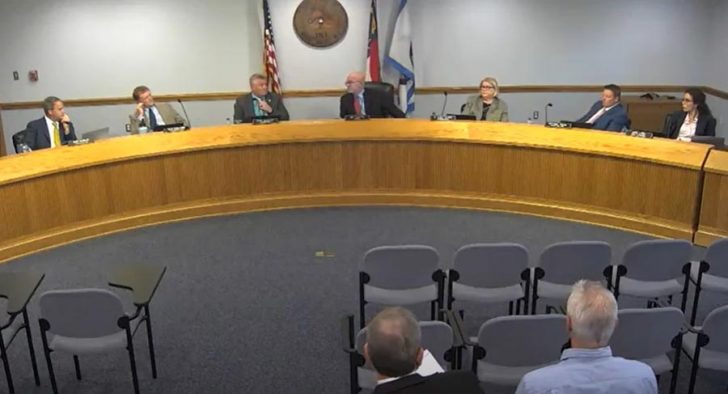 In response to opposition by nearby residents to a possible affordable housing project at U.S. 158 and Hollowell Street, as well as some homeowner concerns about a local pizza shop, the Nags Head Commissioners on Oct. 5 unanimously moved to enact a 150-day moratorium on development in the municipality’s Commercial-2 Zone from Danube Street to Hollowell Street.

A public hearing will be held on Oct. 19 before the commissioners officially adopt the moratorium, which would prohibit all development other than single-family and duplex structures for the designated period. The commissioners expressed the view that such a moratorium would allow staff to take a look at the zoning map to see if there were areas where potential conflicts between homeowners and commercial and other permitted uses in the zone could be reduced.

Examples of permitted uses in the C-2 zone include retail, office, restaurant, banking, service establishments and multi-family to name a few.

“In light of the past few months and the things we’ve heard…I think it would be appropriate,” said Commissioner Renee Cahoon before the vote. “We’ve had a lot of concerns in more than one area…and I think that this will give us some breathing room for staff to take a look at our zoning map and our land use plan.”

The move during the Oct. 5 meeting came after commissioners listened to the views of about a dozen homeowners who had submitted comments voicing opposition over the news that Woda Cooper, the affordable housing developer contracted by Dare County, had identified the vacant property on the southeastern corner of U.S. 158 and E. Hollowell Street as a potential site for such a project.

That comes in the wake of a recent campaign by some historic district homeowners who voiced concern to town officials about the Nags Pizza Company, which relocated to 4036 S. Virginia Dare Trail in July. In response to those complaints, town officials have stated that the business is in compliance with town ordinances.

While residential development is permitted in Nags Head’s C-2 zone, it can mean that homes and commercial dwellings can abut one another. That mix, Mayor Ben Cahoon told the Voice later, “has brought single family homes up against sites that are potential commercial development sites and that’s problematic.”

As part of its efforts to build what it characterizes as more workforce or essential housing, Woda Cooper was hired by the county earlier this year to construct between 40 and 60 housing units at its Bowsertown Road site on Roanoke Island as well as an additional 60 or so at an undisclosed location in Nags Head. Local officials have confirmed that the property Woda Cooper was eyeing in Nags Head is in the area that would be covered by the moratorium.

In August, the Kill Devil Hills Commissioners rejected an effort to rezone the 44-acre Baum tract to potentially pave the way for a high-density multifamily housing site to be developed by Coastal Affordable Housing, LLC., another group working with the county to build essential housing in Dare County.

A number of letters regarding the potential Woda Cooper project in Nags Head were read into the record at the Oct. 5 commissioners meeting.

“We do not believe the Hollowell site is the appropriate choice for this project,” wrote Nadeen Johnson, who owns a home on S. Virginia Dare Trail. “The decision to compromise the area’s historical value and unique geology associated with Jockey’s Ridge shouldn’t be made lightly.”

Johnson voiced concern over the impacts such as traffic, parking, drainage, septic waste disposal, with other homeowners who submitted comments echoing those concerns.

Kimberley Worley, who said she purchased her home on nearby Memorial Drive in 2018 as a rental property until she can retire, was among several homeowners concerned about home values decreasing.

“While I understand the need for affordable housing, this use just doesn’t seem to fit in with the feeling or charm of the neighborhood, which was my reasoning for purchasing in Old Nags Head,” she said. “My concern [includes] the extra traffic it will cause, the overcrowding of the beach access paths, and the value of the homes decreasing. There must be a more suitable location for this project.”

After hearing the concerns of Nags Head citizens, Mayor Cahoon told the Voice that the proposed moratorium was in an effort to provide a breathing period to direct staff to take a look at the zoning ordinance and decide what is appropriate in that district.