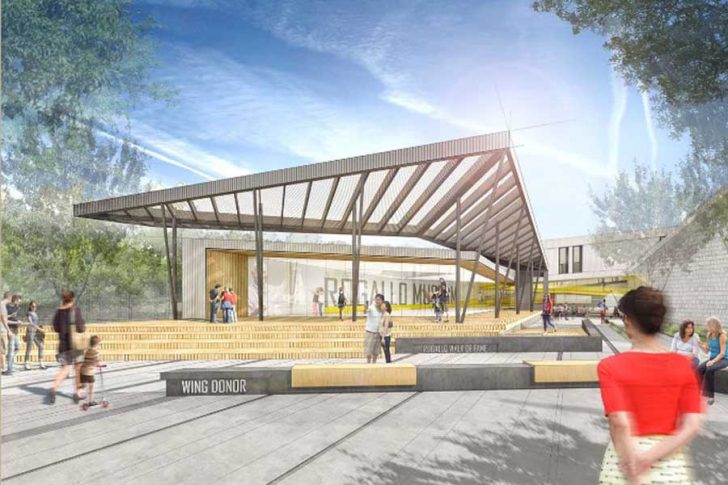 Recent news of renewed efforts by the Rogallo Foundation to build a museum at Jockey’s Ridge State Park (JRSP) honoring flexible-wing inventors Francis and Gertrude Rogallo has gotten the attention of some key community members who contend that Jockey’s Ridge is not the appropriate place for such a museum.

Rogallo Foundation president and Kitty Hawk Kites owner John Harris has presented the plans for the 12,000-square-foot museum to three local boards in recent weeks, including the Dare County Board of Commissioners, which passed a resolution last month supporting the museum.

Most recently, Harris spoke at the Nags Head Board of Commissioners’ Oct. 5 meeting, noting that the foundation and N.C. State Parks would be meeting later this month regarding a land lease at no cost for a piece of land just east of the park’s visitor center.

Several community leaders, including former JRSP superintendent George Barnes, former Nags Head mayor Bob Muller and Friends of Jockey’s Ridge Chair Michael O’Brien addressed the board. Ann-Cabell Baum – the daughter of Carolista Baum who, in 1973, put herself between bulldozers and the 7,000-year-old natural sand dune now JRSP in order to protect it from development – also spoke during public comment.

Those who spoke or submitted comments to the board argued that JRSP is not the appropriate location for such a museum, that it should be built on private land, and that it would lead to commercialization of the dunes.  They also asked that the board pass a resolution against any future development at JRSP.

In a later interview with the Voice, Harris responded to the criticism by citing the Rogallos’ role in making the site a park years ago. He added that such a museum would have a small footprint and was in line with the mission of N.C. Division of Parks and Recreation.

Back in 2018, The Rogallo Foundation began collaborating with N.C. State Parks about the project and went through the site selection process and building concept design, according to Harris, who has told the Voice that the museum would cost about $7 million and could open in about five years.

During the public comment portion of the meeting, Ann-Cabell Baum recalled the summer of 1973 when she and her two siblings ran home to report to their mother that there was a bulldozer taking sand off the back of the dune.

“Carolista then went back to the ridge, confronted the operator of the machine and demanded that it be shut down,” she said. “The bulldozer operator left, and mom removed the distributor cap and with that, began the movement to save Jockey’s Ridge from development,” she said.

“Jockey’s Ridge,” she continued, “was preserved to be a scenic and natural landmark for ‘The People.’ If we don’t remember this, then history will most certainly repeat itself. This museum request will not be the only attempt, in years to come, to commercialize the dune.”

Later, Baum told the Voice that she supports the efforts to build a museum, but not the proposed location. “It’s a very noble and wonderful pursuit and there are some very dedicated people that feel really strongly about it,” she said. “It has nothing to do with the museum concept, it just has to do with the location.”

Friends of Jockey’s Ridge Chair Michael O’Brien also voiced his opposition at the Oct. 5 meeting to plans to put the museum within JRSP and read a Sept. 26 letter from his organization to Brian Strong, the Deputy Director of Planning and Natural Resources with the N.C. Division of Parks and Recreation, voicing the organization’s concerns.

“I sell lumber for a living, so I’m not against development…but do we want commercial development in Jockey’s Ridge State Park? I do not,” he said.

George Barnes, the first superintendent of JRSP who served in that post for more than 30 years, wrote in an Oct. 1 letter to Secretary of North Carolina Department of Natural and Cultural Resources Reid Wilson that, “While I am not against the museum per se; I am only against anything being built within the acreage of Jockey’s Ridge State Park, which is also a designated National Natural Landmark.”

And founder of Friends of Jockey’s Ridge and former Nags Head Mayor Bob Muller, in a letter to commissioners, stated that “Jockey’s Ridge was purchased with state and federal funds, yes, but also with the pennies, nickels and dimes of thousands of North Carolina school children. Coins collected to preserve an amazing natural resource, not to provide land for a private museum,” he wrote.

For his part, Harris told the Voice that the mission of N.C. State Parks is to inspire all of its citizens and visitors through conservation, recreation and education. “And the museum will be inspirational, and it will be educational, so to me, it fits very well within the mission of state parks,” he said.

He added the museum won’t impact sand movement, is not a commercial venture as the Rogallo Foundation is a non-profit group, and will be a complement to the visitor’s center, which is undergoing an expansion.

Noting the mission of the Friends of Jockey’s Ridge to support, enhance and promote JRSP as a significant geologic feature of the Outer Banks, he added, “The reason that the museum belongs there is because that geologic feature has led to years of hang gliding, kite flying, and glider flying…all kinds of things that have been made possible by that geological feature.”

Also at the Oct. 5 meeting, the Nags Commissioners unanimously approved the site plan for the Inn at Whalebone, which when completed, will be a four-story, 11,215-square-foot hotel with 90 rooms located on the west side of U.S. 158 at 6632 W. Pheasant Avenue. The hotel will be accessed off of W. Lakeside Street.

The property, owned by local businessman Stan White, is just south of Nags Head Golf Links and the Village of Nags Head, and just north of Lakeside Drive and the Soundside Event site where an event center is being proposed. House Engineering, P.C. of Kitty Hawk is the applicant in the project.

While not a condition of approval, Nags Head Commissioner Renee Cahoon asked that the town, applicant and the N.C. Department of Transportation pursue a joint venture to fund and install a traffic light at Lakeside Street and U.S.158.

“We all have heard a lot of comments about this proposal, and I know the neighborhood is extremely concerned and should be. That’s where they live,” Cahoon said. “But I also want everybody to understand that any plan that comes forward to the town that meets the ordinances, we don’t get to put extra conditions on it, we don’t get to deny per se.”