Town and county officials at odds during public hearing 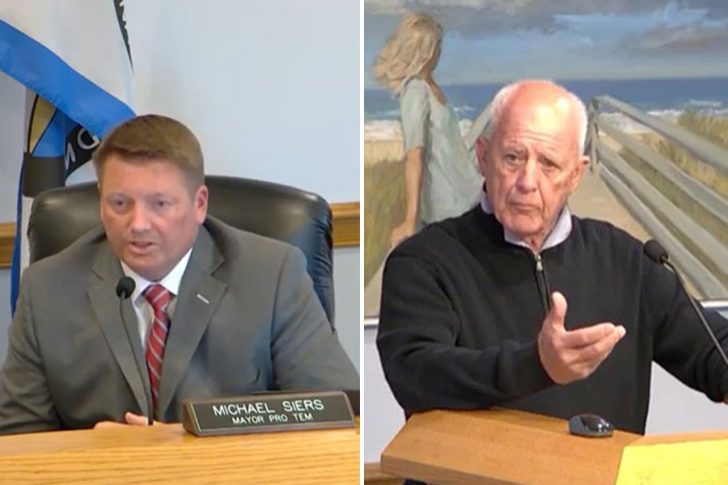 During its Oct. 19 meeting, the Nags Head Board of Commissioners voted 4-0 to adopt a 150-day moratorium that temporarily halts development in the C-2 General Commercial district and within the Historic Character Area between U.S. 158 and N.C. 12 from Hollowell Street to Danube Street. Single-family and duplex homes are exempt from the moratorium.

Mayor Ben Cahoon was absent from the meeting, which included a public hearing on the moratorium that will be in effect until March 17, 2023. More than a half dozen residents and community leaders spoke during the hearing, as well as a representative of Woda Cooper, a developer working with Dare County to build 54 workforce housing units on a 4.7-acre parcel at E. Hollowell Street and U.S. 158 as well as additional units on Bowsertown Road on Roanoke Island.

News of that project, while not yet submitted or presented to the town, spurred a number of nearby residents to voice their concerns to commissioners about the possibility. For months, Dare County had indicated only that an undisclosed location in Nags Head was being considered.

According to the terms of the moratorium, the 150-day window will “provide for the necessary study and review of the type, intensity, and character of the uses allowed in the Historic Character Area and could result in new districts and/or standards being proposed.”

The moratorium also stated that the current ordinances “do not adequately regulate or address development to protect the values and goals” of the town’s Comprehensive Plan adopted in 2017.

“At this time, the Board believes that, based on the broad number and type of uses allowed in the C-2 district, as well as the density/intensity criteria allowed in this district, that any new development, other than single or two-family dwellings, poses a serious and permanent threat to the integrity of the area,” the moratorium states.

Comments at the meeting by Dare County Commissioner Rob Ross and Commissioners Chairman Bob Woodard, as well as Outer Banks Chamber of Commerce President and CEO Karen Brown and Dare County Board of Education Chair David Twiddy, expressed the need to build more workforce housing in the county. Several of them also voiced clear opposition to the Nags Head moratorium.

“This is an issue that we’ve been talking about for years, and it’s not just a county issue,” said Woodard. “It’s up to the towns as well. I would hope that you would really take a hard, hard look at establishing a moratorium and plans, as rumored, to change the zoning in this area so this would not be allowed. If not this site, commissioners, then where?”

“If we cannot find solutions to the year-round and seasonal housing issues faced by our workforce, we will be unable to provide the level of services our visitors, guests and residents enjoy year after year,” Brown said. “If Nags Head moves forward with a moratorium on any development that could include much needed workforce housing, we will be taking a step backwards in our efforts to help our community.”

Commissioner Kevin Brinkley echoed Siers. “Let’s partner, let’s talk about what is going on and how we can partner together to do affordable housing, but at least let us know what’s going on. This was slipped in… last minute and I would just like to separate the topics. But I am in support of a moratorium in regard to how it relates to our [Comprehensive Plan].”

Commissioner Renee Cahoon added that, “We need to address the zoning map to make it fit more with the character of the district.”

There were also a number of residents who spoke during the public hearing or submitted emails commending commissioners for adopting the moratorium. Susan Kalan, who owns a home on E. Hollowell Street, told commissioners that she was attracted to the historical character of the area, the close proximity to Jockey’s Ridge State Park and beach access as well as stores and restaurants.

“We are definitely in favor of a moratorium…We are really against having any more traffic on East Hollowell,” she said. “We are really maxed out. We agree we need affordable housing, but we also don’t think that this is the area to do it.”

Also speaking at the public hearing was Woda Cooper Senior Vice President Denis Blackburne. Speaking of the proposed housing project, he said, “It’s a privately owned development that will be owned by Woda Cooper companies or an affiliate. It’s not a HUD project, we do not have any Section 8, so it’s not public housing and it’s not a development that has vouchers.”

Blackburn told commissioners the proposal includes three buildings with 111 parking spaces and a total of 10 one-bedroom units, 38 two-bedroom units and six three-bedroom units with each unit having a total development cost of $240,000.

As for the moratorium, town staff will initiate planning studies with the planning board at its Nov. 15 meeting, one of several meetings with the board that will be held over the next few months. Any recommended ordinances or zoning map changes would likely be scheduled for public hearing at the Board of Commissioners’ March 1 meeting.