No timeline yet for construction of Nags Head facility 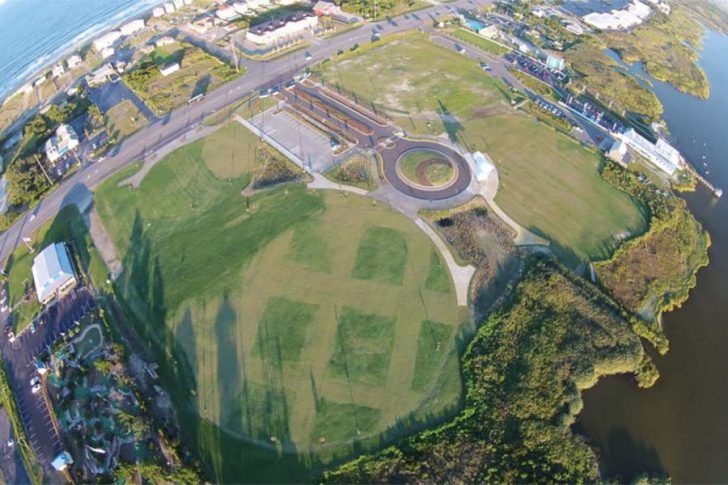 Overhead view of the Soundside Event Site in Nags Head.

As tourism officials continue to provide public presentations about the proposed Event Center at the Soundside Event Site in Nags Head, the building itself is still at least three years away, with no clear timeline for what happens going forward.

“We don’t have a detailed timeline at this point. We’ve been focused on sharing the concept and building consensus for it,” Lee Nettles, executive director of the Outer Banks Visitors Bureau, said in an email to the Voice.

“My best guess is construction could begin in a couple of years and take a year to complete,” he added, explaining the timeframe is subject to change because of the design, regulatory and permitting work yet to be done which could impact the project.

Nettles, along with Dare County Tourism Board Chair Tim Cafferty, presented the concept for the center at the Oct. 5 meeting of the Duck Town Council.

As noted in that presentation, the “next issues to address” include parking and building size and height with the Town of Nags Head; septic, stormwater and a potential traffic signal with the state; a rough order of magnitude cost, operating deficit and construction funding and financing with the Dare County Tourism Board and the county; and building community consensus.

The Dare County Board of Commissioners heard the first presentation on the Event Center concept and passed a resolution supporting the center concept in August 2021.  Over the past year, Nettles and Cafferty have made other presentations to the Outer Banks Chamber of Commerce, Leadership OBX, Outer Banks Association of REALTORS®, Kill Devil Hills Board of Commissioners, Kitty Hawk Town Council, Southern Shores Town Council and also held a public meeting. Nettles said that Hatteras Island presentations are currently being planned.

The proposed building is slated to be about the size of Publix in Kill Devil Hills, and the project includes a boardwalk along the sound. The center’s 48,275 square feet would include a 26,000-square-foot event hall with collapsible walls to facilitate smaller or larger events; a 2,800-square-foot training kitchen; a 1,500-square-foot meeting room; and a lobby, back of the house area, restrooms and a hall totaling 17,975 square feet.

Schematics also show the possible uses of the event hall to include one to three basketball courts with retractable bleachers, three to nine pickleball courts, two to four volleyball courts, gymnastics or wrestling space. The center could facilitate gatherings of 300 to 2,500 people. Other expected uses include galas, speaker events, sporting events, smaller trade shows and a culinary institute “for the industry that dominates locally—restaurants,” Cafferty said at the Duck Town Council meeting.

The center is projected to generate 191 new jobs, including nine full-time equivalent jobs, and $25,250,000 in new spending, according to the presentation. It’s expected to operate at a deficit of about $310,000.

According to tourism officials, the facility would help support more year-round tourism and sustain more year-round jobs. Tourism employs one-third of Dare County’s residents, and about 70% of the county’s annual occupancy taxes are collected in just three months of the year—June, July and August.

The center would “flatten that curve” and increase out-of-town groups’ visitation to the area from October through March, Nettles said.

“The multi-million-dollar return justifies the anticipated operating deficit,” Dare commissioners wrote in their resolution supporting the center, noting the projected $25 million in new spending and nearly $1.2 million in tax revenue by its fifth year.

During the process of discussing and planning for a multi-use facility, a convention center concept was quickly taken off the table because of size requirements as well as the expectation of a hotel being attached and the distance from the closest major airport.

“Maintaining green space was and is a priority for the Tourism Board,” Nettles said in an email explaining why a hotel was not pursued. A hotel would have eliminated green space, greatly increased the septic requirements, hotel deals often require a subsidy and the Outer Banks Hotel/Motel Association—”one of our main stakeholder groups”—was opposed to it, he added.

The Town of Duck has a council member on the Tourism Board, but no council resolution supporting the Event Center concept has been discussed or planned, according to Duck Mayor Don Kingston.

“I personally have no opinion at this time on the proposal,” he said in an email, adding that the council considered the presentation “a status update.”