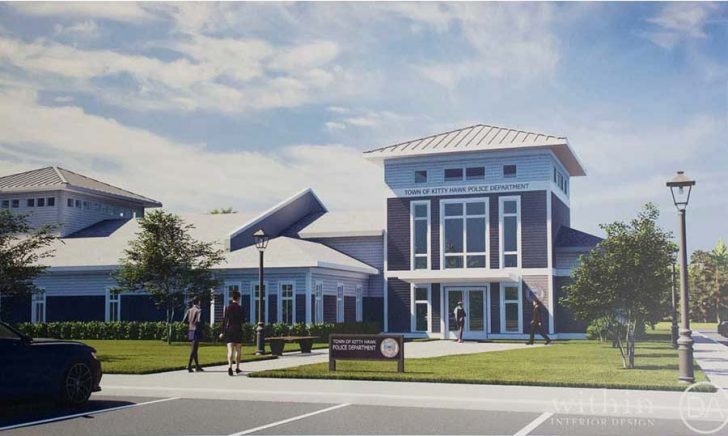 A rendering of the planned new Kitty Hawk Police Station.

Four years after the Town of Kitty Hawk made the decision to move the police station from its present location on Kitty Hawk Road to a new location, the town held a groundbreaking ceremony at the former site of the Sentara Medical Center.

The $4.1 million purchase of the property from Pasquotank County last month will allow the town to relocate the police building to a site that will not be subject to flooding.

The steps to purchase the property and begin the process of creating a new police headquarters were frustrating and time-consuming according to Kitty Hawk Mayor Craig Garriss. “You have suffered at a location for a long time,” he told the police officers in attendance. “We kept telling you be patient, we’re gonna get something for you. To be honest, with you, I got impatient myself.” 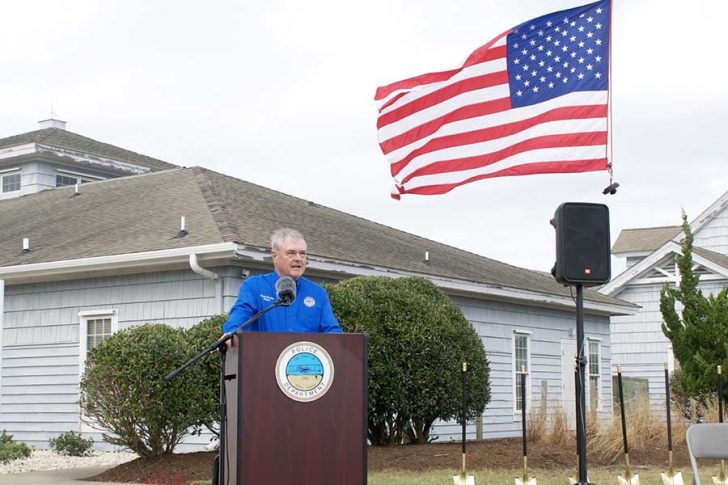 Mayor Pro Tem Jeff Pruitt, who worked with Police Chief Joel Johnson on the project since its inception, outlined why a new building is necessary.

“Back in 2011, we had a hurricane in Kitty Hawk called Irene…It flooded our police department and left us unable to do the business that we should be able to do,” he said. In 2018, “here comes Michael. Not as bad as Irene, but pretty close. Joel [Johnson] gave me a phone call…He’s stuck between two major canals. He was calling in his patrolmen to save sensitive files and evidence as well as records…This is when we decided to start this project.”

Chief Johnson echoed Pruitt’s story, explaining that when the police building floods, his staff has to work quickly to “empty out the entire downstairs of the police department, and put it upstairs. That affects our service to citizens and visitors.”

The Kitty Hawk Police Department will take up half the building and plans call for the other half to be utilized as medical offices. Bear Drugs has already signed a lease to remain in the building, Mayor Garriss said, adding that the town is in “very active conversations about some medical care coming in to fill those suites.”

The northern half of the structure is slated for demolition. That section of the building that was the old surgical wing has significant mold issues according to Council Member David Hines, who oversaw the inspection reports for the site. The southern portion that is being retained is in very good condition, with fairly recent renovations and upgrades in 2014, he noted.