“One of the biggest pillars in our community” 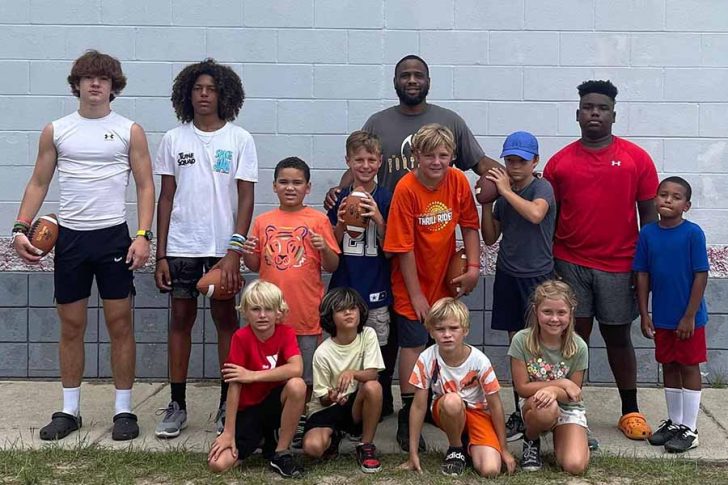 Timmy Charity and some friends at the Outer Banks YMCA. (Photo courtesy of Timmy Charity)

Back in June, Timmy Charity was in Family Dollar in Manteo when he overheard a woman telling the cashier that she had just taken in her two young grandchildren, but had no furniture in her home, except for one blow-up mattress that they slept on each night.

Charity told the woman he could help. He started making calls and posting on social media about the situation. Within a week, he had the family’s home fully furnished. Friends say that is just another day in the life of Charity, who is known for his acts of kindness and — charity.

“Timmy is one of the biggest pillars in our community,” says Isaiah Govan, who played for Charity at Manteo High School and is and partner in Garage Boys Racing. “From young to old, he has an amazing impact on our lives.”

But he also came back home with a mission — to give back to the community, and to show local kids who come from a similar background that they can achieve their dreams.

Aside from his coaching duties at Manteo High School, Charity is the ISS (In School Suspension) Coordinator for the high school, a program in which students with behavioral issues are sent for the day to work on study habits, classroom behavior skills, and a positive self-image. He is a former AVID college readiness tutor as well as the Vice President of Garage Boys Racing, where he heads up community relief efforts, charity events, and activities and field trips for kids.

In addition to his official activities and responsibilities, Charity spends time finding ways to help young people in the community who need a role model and helping hand.

“The bond you create with kids is what it’s all about,” he said in a Voice interview. To me, [there’s] more to sports than just having a relationship on the field. To me. it’s more important to have a relationship with the kids on and off the field.” He said that bond is made stronger by the fact that he and many of the young people he interacts with share a similar background.

“You know, everyone’s not the same, but there’s always that set group of kids that can use the extra push and the extra motivation,” he added. “Living in a low-income household, coming up and being able to overcome the odds and step out there really helped me build a relationship with kids because I know what [they] go through on a daily basis.”

Charity brings some of that perspective to his role as ISS Coordinator. “We don’t use that old method of ISS like they used to use, like crack the whip or beat down on the kid’s mentality,” he explained. “They can come in here and open up to me about stuff and having that mentor background, I just take it as an opportunity. Maybe there’s something I can say or influence these kids to save a life or turn the page in life because you just never know what these kids go through on a daily basis.”

Woody Carver, a lifelong friend of Charity, says watching him overcome his own upbringing has had a huge impact on his life.

“His will and determination and intellect are what made me want to change my outlook on life,” said Carver. “He and his family have played a big part in my life — if I needed a meal, or a place to lay my head, or just words of advice and support. He’s truly a one-of-a kind person.”

Charity credits many people in the community who helped him when he was growing up, including his friend Allen Stallings’ mother Delores Stallings, who took him in when his family was struggling and raised him alongside Allen and her daughter through his high school years.

Other key influences in his life include Daniel Selby, who was one of Charity’s coaches growing up; R.V. and Julie Owens, for their kindness to him and his family; and Edgar “Poor Boy” Govan, who Charity says was a father figure to many in the community.

Several years ago, Isaiah Govan and Charity wanted to keep “Poor Boy’s” legacy going, so along with Govan’s older brother Trey and a few other locals, they started Garage Boys Racing, a motorcycle racing team (Poor Boy was an NHRA drag racer), with a mission to lend a helping hand to the community.

With that money, they have worked with Dare County Social Services Division to provide Thanksgiving meals and turkeys to families in need and they work with Dare County Parks and Recreation to provide cleats to kids in need. They hold Christmas drives to provide presents to kids, Halloween events giving out candy and cookies and activities, and they offer hurricane and disaster relief in the form of free bikes to kids and checks to families to repair their roofs for storm victims. They also take youngsters on field trips to races and to places such as the aquarium.

Recently the organization put on an event called Get Mechanically Inclined where they set up stations to teach youngsters how to change their bike chain and tires, change a car’s oil and tires, and learn other mechanic skills. They also had landscaping and concrete companies let kids help them operate their trucks, tractors and lawn mowers, state troopers came out to demo their cars and equipment, and a construction company showed up with excavators and power washers.

“You never know, maybe a kid might say ‘I want to drive a truck later in life or I want to be a state trooper,’” noted Charity.

He was also asked to come to the Outer Banks Family YMCA recently and talk about football. He ended up inviting his nephew, who plays football at Manteo High, and a couple of football player buddies and they played punt, pass and kick. After the event, the coordinators dropped off handwritten thank you notes from the youngsters.

“Any kid that needs something, I’m going to find a way,” Charity said. “If I hear you need a pair of shoes, we’re going to Rack Room to get you a pair of shoes. When I hear something like that, I know it’s an act of God letting me know ‘ok this is your time. This is what you need to do.’”