‘Wait, you can do this for a living?’ 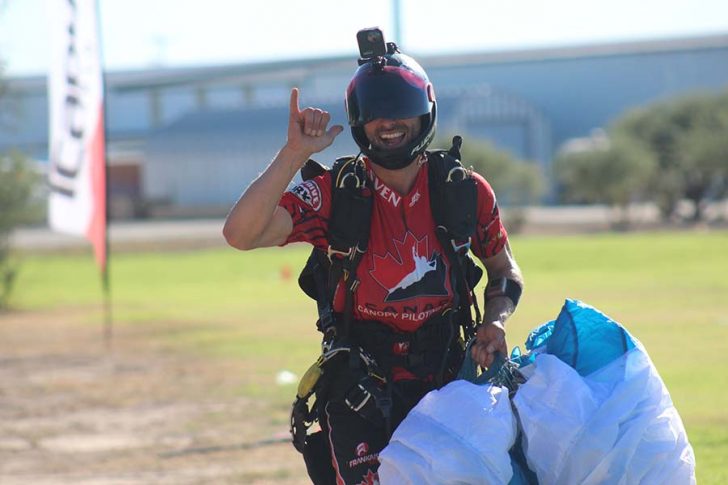 Jseppi after competing in the distance competition in the Arizona championships. (Photo courtesy Sven Jseppi)

Sven Jseppi, the owner of Skydive OBX, has always been adventurous. But he didn’t know where that adventurous spirit would take him until he was free falling through the air 18 years ago during his first skydiving experience.

“As soon as the parachute opened my first question was, ‘Wait, so you can do this for a living?” he told the Voice.

The instructor informed him that he only needed 499 more jumps and he could become a tandem skydive instructor. He went home and started saving his money. A year later, in 2004, he found a training center in his community of Alexandria, Ontario.

“I walked into the skydiving center, brought them a big stack of cash and said I want to be a skydiver, I don’t care what it costs,” he recalled.

On October 17, 2022, with more than 16,000 jumps under his belt and a successful skydiving business on the Outer Banks, the 40-year-old Jseppi was crowned world champion of Canopy Piloting, a competitive form of skydiving that uses small parachutes and extremely high speeds and long distances on a horizontal course. The competition was held in Eloy Arizona.

Canopy Piloting originated in the mid-1990s and involves being much closer to the ground than traditional skydiving. In Canopy Piloting, the participant jumps out of a plane at 5,000 to 6,000 ft. and deploys the parachute a few seconds after jumping, dropping into a course and performing a series of tasks that involve speed, distance and accuracy. Because the jumping is so much closer to the ground, the course is usually over a body of water.

Each task starts with the parachutist navigating through a number of gates. The competitor has one of four goals, depending on the task; complete the course in the shortest time, therefore having the highest speed; complete the water section and then land on a target as accurately as possible; achieve the longest distance from the entry gate before touching down; or perform freestyle maneuvers while navigating the course in the most aesthetically appealing and precise manner.

Jseppi won the Gold Medal for distance and the Silver Medal for speed, allowing him to capture the Gold for the overall competition.

“It’s definitely still kind of a shock, what I was able to achieve and what I achieved,” he said. “And it’s funny because I actually have a lot of friends and family that reach out to me and ask what it actually is that I do, because it is such a niche sport that it’s not actually well known.”

“We basically just spiral down towards the ground and build up as much speed as we can, which then we turn into horizontal speed and create all the lift and power and speed to go as far as we can or as fast as we can or be as accurate as we can,” he explained.

That first year that he dropped all of the cash on the table, Jseppi completed 200 jumps. He dove in headfirst, sold all of his possessions and spent all his money on skydiving so that he could get the 500 jumps he needed in order to become a tandem skydive instructor and get paid to do what he loved — taking students up and jumping out of the plane with them harnessed to him. Within three years, he secured a paid summer job at Niagara Skydive Center near Niagara Falls, Canada.

The first few years he was going back and forth, doing tandem skydiving in the summer and working in his parents’ garage in the winter. After a few years, he told his parents he was moving to Florida because the weather is much more conducive to skydiving.

Jseppi said while his parents were disappointed, they were also really supportive. He added that it even inspired his dad to go out and get his license as well. Silvio Jseppi, 63, currently has 100 jumps.

Jseppi was in living in Florida when he met his wife, Heather McLay, at a skydiving center. Heather lived on the Outer Banks, but she was visiting her hometown and decided to go for a skydive. Jseppi told Heather he would absolutely love to move to the Outer Banks, but he had just gotten out of the nine-to-five world and didn’t want to go back.

The next day, they called the Dare County Regional Airport and asked if it would be open to the idea of a skydiving center and if so, could they send them a business plan. The airport said yes, and Jseppi moved to the Outer Banks opened Skydive OBX by 2011.

This year, starting at the end of August, he made 250 jumps in one month to prepare for the 9th Annual FIA World Canopy Piloting Championships that would crown him world champion.

He also came up with his own tools and techniques. He had friends and coworkers take videos of his jumps. He also has a GPS tracking device on his helmet that tells him exactly how fast he’s going at each point so that he can fine tune things according to what the conditions are doing.

“It’s basically all self-taught, self-trained, self-coached,” he told the Voice. “It’s long days, hard on the body, hard mentally, you’ve really got to push yourself, but I was determined and it’s always how I’ve been – just push hard.”

When he won the championship, there was a big ceremony, including the playing of the National Anthem and bestowing awards, similar to the Olympic Games.

“To say we are all proud of him at Skydive OBX and the Dare Co Airport is an understatement, as he has been working on this goal ever since he started skydiving and has been training so hard this year,” says his wife, Heather.

“It was an amazing feeling,” he says. “And overwhelming. Back when I started getting serious about it you always think about that moment in the future like what is it going to feel like, what is it going to be like, and you can’t really put it into perspective until it happens. To me it felt like finally the hard work had paid off.”