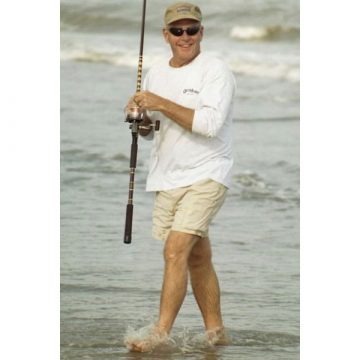 Bill was born on June 17, 1942 and raised in Portsmouth, Virginia. A graduate of Churchland High School and Virginia Military Institute, he accepted a commission into the U.S. Army as 2nd Lieutenant and served in the Vietnam War, where he was awarded the Bronze Star. In June of 1964, Bill married his hometown sweetheart, Dyan Rich, and together they raised five children.

When Bill’s Army days ended in 1965, he began a long and storied career with Naval Facilities Engineering Command (NAVFAC) at the Norfolk Naval Base, and he earned a master’s degree at Old Dominion University. Bill retired in 2001 as the Director of the Engineering and Design Division for the Atlantic Division. Never a man to sit idly (unless it was on the beach with a fishing rod in hand), Bill jumped into retirement with gusto, serving on the board of directors for Maryview Hospital and as the co-founder and CEO of Psycho Deck Builders. Later in his “second retirement”, Bill was an avid volunteer with the Water’s Edge Village School and the Corolla Wild Horse Rescue Foundation. His North Beach wild horse tours were legendary, and they often included a stop with visitors at his own house on the beach.

Always a mentor, Bill provided guidance and friendship to everyone who knew him. He never gave up on anyone, especially those who needed him most. His true loves in life were his wife and many, many kids and grandkids, beach days, and “QFT” – Quality Family Time – with his favorite people.

He is preceded in death by his parents, his grandson Tanner Crone and his brother-in-law Richard Jordan.

Bill will be remembered for his service to our country, strong work ethic, mentorship, and most of all, as a loving husband and father.

The Crone family would like to extend our heartfelt thanks and appreciation to the wonderful staff of nurses at the Outer Banks Hospital, who helped us through the hardest days of our lives.

A Mass of Christian burial to celebrate Bill’s life will be held at the Church of the Resurrection, 3501 Cedar Lane, Portsmouth, VA, on Thursday, November 17, at 1 P.M. Burial will follow at the Albert G. Horton, Jr. Memorial Veterans Cemetery. The family will receive friends at the church one hour prior to the service. Sturtevant Funeral Home, Portsmouth Blvd. Chapel is handling arrangements.