What happens when five Santas meet for lunch? 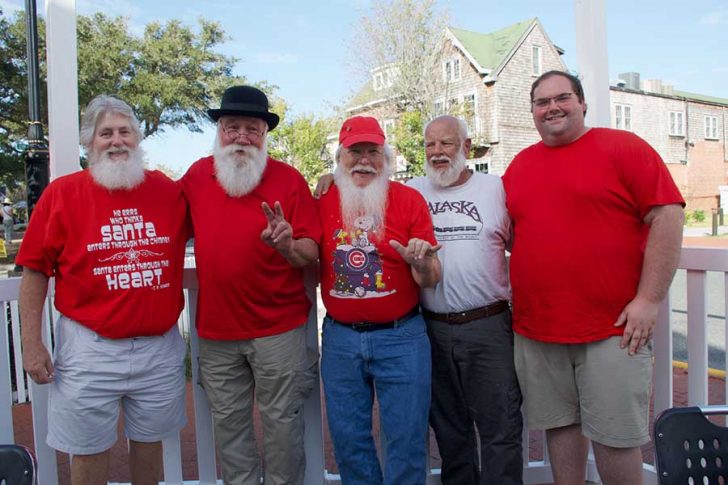 Heartwarming stories and shoptalk from the North Pole

There was a gathering of the Santa Claus clan the other day at the Lost Colony Brewery in Manteo. Five local Santas met over lunch to review the upcoming season, share experiences and talk about years past. Eric Roughton is from Columbia in Tyrell County. The other four, Al Glatkowski, Le Hook, Dick Anderson and Doug Thompson, live in Dare County.

There was a lot of joy at the table and talk about different Santa suits, how to maintain them, where to buy boots, bells and everything else that goes into creating the Santa that children will believe in.

It is expensive being a Santa. Everyone at the table started with a borrowed or cheap (their word) Santa outfit. They quickly realized something better was needed and invested in an outfit that would better reflect who they were and how they wished to be seen.

Although they did not say specifically what they charge when appearing as Santa, the subject did come up.

There were some funny stories as well, like the time Eric Roughton, who was the only clean- shaven Santa at the table, had his beard ripped off.

“I was wearing designer beard. This little girl, her little fingers caught in my mustache,” he said. “I was in a room by myself actually. We do only one family at a time. She ripped it up and I was like ‘oh my gosh.’ I didn’t have any glue. The only thing I had was super glue.” The situation ended with Roughton’s hand glued to his glove.

None of the Santas had ever planned to do this. Roughton, the youngest at the table, began his career 12 years ago when he was 17.

“I was always a bigger guy, so I thought it would be cool to be a Santa…I was in choir in high school. We had a Christmas concert, and they wanted a Santa to come out, so I bought a cheap suit, and I became the Santa for that night,” he said. “Then after that, I got invited to be Santa at the sheriff’s department for the second-grade field trip they had. And then a couple churches contacted me.”

“I was a high school teacher. So I had a love of kids and young adults,” Thompson said. “I was involved with theater at my high school, and I got to play a Santa Claus part. And little light came on. I was like ‘yeah, you could do this.’”

It is all about the children. That is something the Santas return to time and again. Glatowski recalled that one of the first times he was in his holiday suit was at a private party with no children.

“It was a real estate party, and I don’t like doing them. Never again, unless a lot of the children are there as well. That’s the rule, it has to have children,” he said

The clan agreed there are two most important qualities that every Santa must have are a love of children and the ability to focus on just the child. Those two skills bring an important reward.

“During that period of time [Christmas], I have the best job in the world,” Hook said.

There are also challenges that come with that, however. Most of the children come with a list in hand, anxious to talk to the big guy. But sometimes what they want most in the world is beyond the scope of Santa’s powers.

“You get the ones that want mom and dad to get back together,” Hook said. “When we had so many service people deployed in Iraq and Afghanistan that would be a frequent request. ‘I want my dad to be home for Christmas’ or ‘I want my mom to be home for Christmas.’ There’s not much you can do with that. I tell them…I’m going to pray for their safety, that they will eventually get back home to you safe and sound.”

Glatkowski recalled a particularly emotional visit when two children sat with him in Corolla.

“I asked them what they wanted for Christmas, and they wanted their mother who was fighting cancer to be alive,” he said. “That was their gift. I brought the mother over and had her sit with me. It was her and the two children. We talked and I stopped the entire line for about fifteen minutes…I listened to the mother, and she just was all in tears. And so I told them after she finished crying, I said, ‘Well, I can’t make those kinds of promises. But I will promise you this. She will be in my heart and thoughts every day.’”

Glatkowski said the story has a happy ending. The mother went into remission and a year later when he saw the children again, she was with them.

The stories, however, do not always have a happy ending. Dick Anderson was asked by a mother to spend some time with her young son.

“I was at the Peak Nursing Home and a mother came up to me and told me that it was going to be her son’s last Christmas,” he said. “I sat with this kid, and we just sat and talked about just about everything I could think of…He asked about reindeer and things like that…And when it was done, I gave him a big hug started to leave. The mother came over to me and you could see tears coming down my face.”

A recurring thought among this group is that as much as the children may receive from Santa, the Santas get more in return.

“The reality for me, is it has profoundly changed my life…What I get out of it has helped save my life. I don’t know any other way of saying it. It gives me a reward to be able to contribute something that they [the children] will always cherish and remember the rest of their lives,” Glatkowski said.

“We are we are myth carriers.” he added. “We are carrying on this myth and telling the stories.”