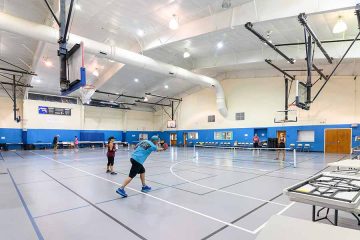 Everyone, it seems, wants in on the “picklesphere,” a term describing the growing “obsession” surrounding pickleball, an increasingly popular game resembling tennis in which players use paddles to hit a perforated plastic ball over a net.

Such luminaries as Tom Brady, Mark Cuban and Lebron James have all invested in the sport, which now has a Major League Pickleball enterprise. A 2022 report from the Sports & Fitness Industry Association called it the fastest growing sport in America, with 4.8 million players nationwide, a 40 percent increase from 2020. National Geographic, The New York Times, Time Magazine, and other news outlets have recently published articles on the phenomenon. The New Yorker even ran a piece with the headline, “Can Pickleball Save America?”

In this environment, it’s not surprising that the Outer Banks has also entered the picklesphere.

“Youth sports are very, very important, there’s no doubt, but so are seniors and adults,” asserted Scott Garber, president of Outer Banks Pickleball Group and Outer Banks ambassador for US APA, the national governing body for pickleball. He is also member of Community Voice, a group of individuals speaking out for more pickleball courts, and for more parks and recreation facilities in general.

“You hear that excuse about youth that if we don’t get them out to play, that they’ll start doing drugs, etc. Well, we were joking amongst us seniors that if they don’t provide a place for us to play, we might go out and start robbing banks,” Garber said.

From his research, Garber found that Wilson, North Carolina’s Parks and Recreation Department just approved a project in its J. Burt Gillette Athletic Complex for 4.2 million dollars to build 24 pickleball courts. In Raleigh, a private group is coming in to build 24 courts — a 70-million-dollar project including tennis and pickleball courts.

According to Garber, some local officials from Wilson County took a trip to Pictona Florida’s impressive pickleball complex, and then went to Naples, where there are more than 160 courts.

“And they thought ‘Wow, pickleball is happening.’ They came back to their county, went into a session and in ten minutes they voted and passed a 4.2-million-dollar project because they knew pickleball is growing,” he told The Voice.

Here on the Outer Banks, the pickleball phenomenon started about a decade ago with four people playing in a few local facilities. Now, the OBX Pickleball Group has over 430 followers on Facebook.

As perhaps the area’s leading pickleball evangelist, Garber cites the reasons why the sport benefits the community. For one thing, OBX Pickleball holds its tournaments in the shoulder seasons, in spring and fall, giving tourists a reason to come during the off season, he said. Garber added that it’s something vacationers are looking for more and more frequently when they come to the Outer Banks.

According to Garber, there’s a large social network of players on the Outer Banks. They have picnics, tournaments, and at Pine Island Racket and Fitness Club, they recently had an event called Dink or Treat (a dink is a soft shot hit on a bounce), where everyone dressed up in Halloween costumes and played together. 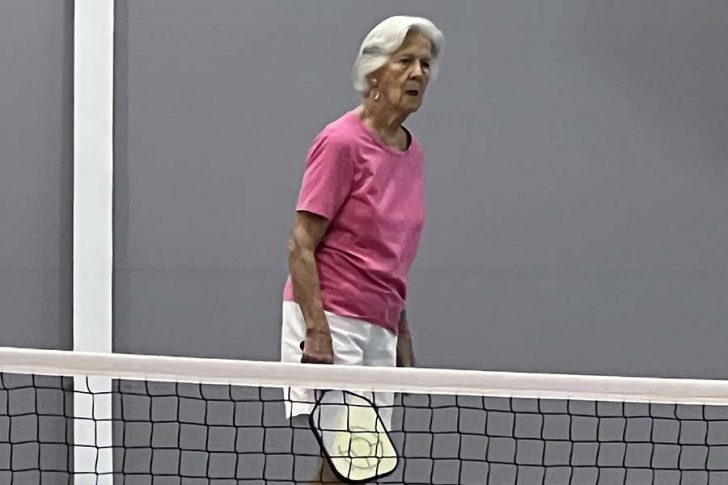 As to the social and health benefits, including for senior citizens, 92- year-old Betty Ambrose was one of the top finishers in the women’s over-50 competition at a tournament held Nov. 5 and 6 at the Dare County Parks & Recreation facility in Kill Devil Hills

Garber also explained why he believes more courts are needed. At one of their main locations at the Kill Devil Hills facility, players currently use four shared outdoor courts that have been converted into pickleball courts when they aren’t being used for tennis. Since it is a two-four-player game, Garber said they typically have 16 people playing at a time, with as many as 30 people waiting on the sidelines. There are also usually three to six indoor courts that they borrow from basketball and gymnastics, which he said leads to a lot of players standing around waiting inside as well.

“What happens a lot is when you’re overcrowded you could be sitting as many as forty-five minutes waiting for your next turn to get on the courts,” says Garber.

On September 6, local pickleball advocates went to a Dare County Commissioners meeting and spoke out on the need for more pickleball courts and recreation areas, something that initially generated a pointed response from Commissioner Chairman Bob Woodard. However, since then, Garber explained, the group has met with Woodard and he has become a supporter, visiting the existing pickle ball courts and looking into ways they can possibly build more.

“He’s doing an excellent job now on what he said,” says Garber. “He’s going around, he’s visiting the courts, he’s checking out locations, he’s seeing a lot of things that were going on, and he’s correcting those things. He’s working on our behalf right now to try to improve things in Dare County, so hats off to the chairman. He is doing everything that he’s said he was going to do since that September 6 meeting.”

At that Sept. 6 meeting, the Dare County Commissioners approved a Capital Improvements Plan (CIP) that included a $453,6000 line item for the year 2028 that was partially for pickleball courts, with some of that money going to other improvements at recreational facilities. According to Garber, the county is looking into possibly moving one of the recreation phases up into next year’s budget and possibly fast tracking some of the recreation that is needed in Dare county.

Garber sees the Community Voice’s role as an advocate for getting the county, and its municipalities, to invest more in these recreational resources.

“We have to be one big voice for the community, not only for pickleball, but for lacrosse, soccer, every sport, because the way we’ve been doing it for the last twenty-five years is growing old on people,” he asserted. “They pay taxes, and they want services, and they see the enormous amount of occupancy tax that comes in as well as the land transfer tax.”

“Overall, I think that we have the attention now of the Dare County Board of Commissioners,” he added. “They are looking into adult recreation, and they realize that not only is it pickleball, but there’s a lot of people coming out of the woodwork that are saying ‘How about us?’ So through Community Voice, we have made ourselves aware, and the commissioners are responding in a very positive way.”