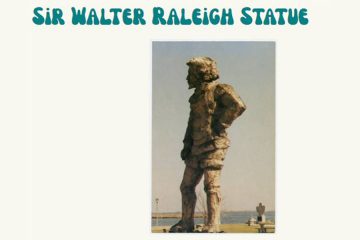 Officially, it is called the “OBX Days Gone By” interactive map that was created to celebrate Geographic Information Systems Day (yes, that’s a thing) that was celebrated on Nov. 16.

Several dozen memorable properties — from restaurants to nightspots to hotels— that have disappeared from the local landscape are brought to life on the map, which provides a mapping component to pinpoint locations and comes replete with vintage photos and a short narrative that documents the history, the rise and fall, of the once-popular attraction.

To provide a sense of what is included in the map, it starts with “the location that began tourism in Dare County,” the Nags Head Hotel, that was built in 1838 by plantation owners and grew to hold as many as 250 rooms. It was burned down by Confederate fighters in 1862, but was rebuilt and re-opened “until the sands of Jockey’s Ridge slowly swallowed it sometime in the 1870’s.”

More contemporary Outer Banks fixtures, such as The Pit and Kelly’s Nags Head restaurant and tavern are included in the exhibit, as is the attraction that vanished most recently, The Futuro (UFO) House in Frisco that was destroyed by fire on Oct. 19.

In between, we visit such slices of local history as the Nags Head Casino, Newman’s Shell Shop, Queen Annes Revenge, Footsball Palace, The Ghost Ship and The Sir Walter Raleigh statue in Manteo, a 24-foot- high structure which is described as “ugly,” and which suffered the ignominious fate of being beheaded and removed. And there are many more.

Kudos to the Dare County GIS Department for literally creating a tribute to remember. Here is the link to the “OBX Days Gone By” interactive map.