Dedicated to the herd mentality 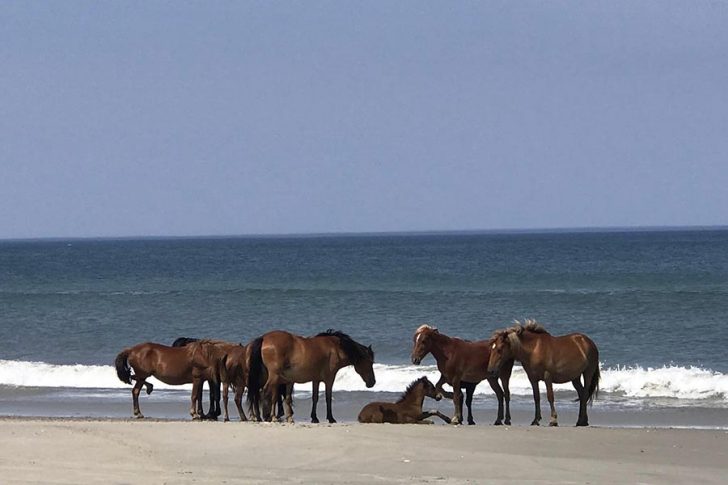 How the Corolla Wild Horse Fund protects its unique community

What do you do when a herd of wild horses that has been around for more than 500 years are being killed at an alarming rate? You protect them at all costs. That was the thought of a group of concerned citizens who banded together in 1989 when a number of wild horses were hit and killed on Highway 12 from 1985 to 1989.

According to Meg Puckett, Herd Manager of the Corolla Wild Horse Fund, the organization began as a volunteer effort when the Spanish Mustangs, long known for their resiliency after being left behind by Spanish Colonists in the 16th Century, finally met their match as human development migrated up to the once isolated northern beaches and paved roads reached their home.

“These citizens got together and said we’ve got to do something,” said Puckett, who accepted the role of Herd Manager for the Fund in July 2016.

Now, as part of a 501C3 nonprofit organization incorporated in 2001, Puckett, along with Chief Operating Officer Jo Langone and a handful of passionate staff members, continue to dedicate their lives to managing and protecting this endangered breed, their habitat, and their rich history through education, data collection, DNA research, breed preservation, and population control. The Fund currently has a combined 18 staff and volunteers to manage its 100-horse herd, but that number can vary slightly.

The organization has at least one staff member on the beach seven days a week, 365 days a year monitoring and recording data, with Puckett being on call 24 hours a day. They log latitude, longitude, weather, how many horses they see, horse identities and notable behaviors such as breeding and fighting.

“I always say the more we know about them, the better equipped we’re going to be to manage them,” said Puckett.

Their new land preservation initiative is a good example of that. The initiative is designed to expand and protect the wild horse habitat by acquiring and preserving land dedicated to the horses. To that end, a Land Acquisition Fund has been established to allow the community to donate to the cause.

According to Puckett, as they track their movement, it gives them an idea of how the horses utilize the habitat at different times of year, which can help in making decisions about land acquisition.

Data collection also helped the Fund achieve one of its biggest accomplishments ⁠— doubling the size of the herd agreed upon by the Wild Horse Advisory Board, which is made up of representatives of the Corolla Wild Horse Fund, the State of North Carolina, US Fish and Wildlife and Currituck County. The Fund was able to convince the board to raise the allowable limit from 50 horses to more than 100 several years ago after convincing them that more horses would not have an adverse impact on other wildlife.

“We do not operate in a vacuum. The horses are not necessarily in Fish and Wildlife’s best interest. They’re there for waterfowl and preserving the marsh,” noted Puckett.

In recent years, the Fund has taken its scientific data collection to a new level with its DNA research project, which Puckett characterizes S one of their other major accomplishments. By taking DNA samples from the horses and processing that DNA, the Fund creates an ancestry to figure out how all of the horses are related to each other and how that information can be used to help save them.

Puckett says this project has been recognized by organizations across the county and the world that are involved with rare breeds and conservation. 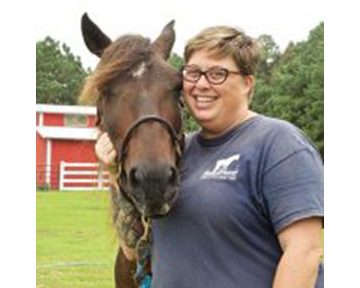 “We’ve gotten a lot of support from people who do this for a living and recognize what we’re doing to conserve these horses in a very scientific way,” she stated. “I hope that the work we’re doing will help other herds around the country.”

But what happens when they notice that one of the horses is injured, or sick, or at risk of dying? Puckett says that first and foremost, they want to keep these horses wild. They will not intervene in a medical or emergency situation unless the horse would otherwise die. When staff sees that a horse is in danger, they consult with veterinarians and experts across the industry to decide what to do.

“Pulling a horse off the beach is a last resort,” explained Puckett.

According to Puckett, this is because with a population of 100 horses, every horse’s genes are invaluable, and when you start intervening for every little cut, scratch, or bruise you will eventually change their genetic makeup.

“You think of survival of the fittest. They’ve developed adaptations and they’ve figured out how to survive in the wild over centuries, and so we want to be as hands off as possible,” said Puckett. “And its challenging because we’re managing a population of wild animals in a very, very high profile, highly visible environment.”

In addition to horses, a lot of what the Fund does is manage people. That’s where the education part of their role comes in. Puckett and the other staff spend a lot of time talking to beach visitors out in the field, especially during tour seasons.

Puckett also spends time doing outreach and programming at community events, schools, nursing homes and on social media, and she teaches classes to schools and groups across the country through Zoom. Sometimes the Fund brings along rehabilitated horses from their farm in Grandy and has open houses and holiday events where people can get up close and personal with the horses in a fun and safe way.

A big part of the education is teaching people what not to do when they see a wild horse to stop preventable tragedies like the one that occurred in 2020, when a yearling named Danny choked and died after being fed an apple. According to Puckett, it will be generations before that loss is recovered genetically within the herd.

She gives another example of a mare in 2019 who developed a fungal infection after birthing her second foal. They decided to keep the mother in the wild because the young horse would not survive without her. The next year, when the foal was able to survive on its own, they took the mare to get help, but she didn’t survive. And then, the following January, her three-year-old daughter was hit by a truck.

“And so that’s it. That’s the end of a family line,” said Puckett. “So it’s just a good example that it just takes one person one person to kill one horse and that could be the end of an entire family line… It’s so important…for people to understand how far reaching the consequences of their actions are even if they don’t mean it in a negative way, even if they truly did not know that they shouldn’t feed that horse an apple. Those genetics are gone, and they can never be recovered.” 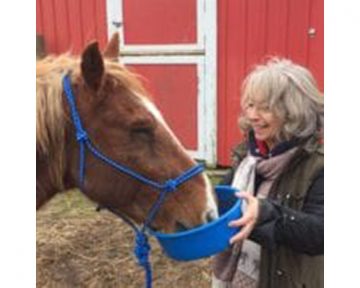 Most of the staffers, who previously worked in history museums and at the Virginia Zoo, formed a connection with these horses long before they started working at the Fund. Puckett, originally from the Tidewater area, spent summers growing up on the Outer Banks out on the beach searching for the horses.

But to Puckett, the occupational hazards are clearly more than worth it.

“To be the person who gets to be around them every day and be the person who gets to make decisions about their care and their future is such an honor, and it’s not something that I take for granted,” she told the Voice. “I always say if I could go back in time and tell twelve or thirteen-year-old me, you’re going to be here one day, I don’t know that I would have believed it.”