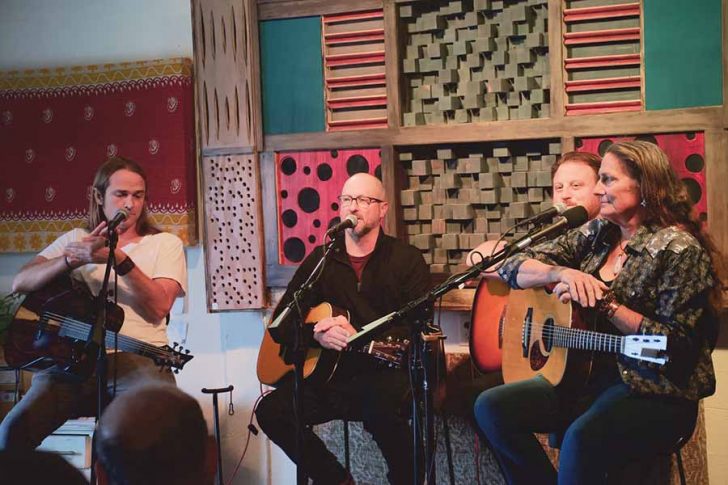 Being at the Songwriters in the Round at Hi Vibe Holistics Co-Op in Kill Devil Hills on Sunday, Nov. 27 felt like a trip back in time. In the not-too-distant past, the room where people gathered to hear local musicians and composers Ruth Wyand, Ben Saltzman, Craig Honeycutt and Matt Maguire perform was known as The Pit, a legendary music venue on the Outer Banks.

The comparison only goes so far, though. The audience was not packed in elbow to elbow, the music never approached 110 or 120 decibels and there was no smoke in the air.

Instead, what Aida Alvarez and her OBX Hippie Productions created was an afternoon of great music and a chance for the musicians to talk about their journey and the music they write.

It was an intimate setting; there were maybe 30 or 35 people in the audience. There was an informality about it and the musicians had a chance to talk about their lives, their influences and how that has impacted what they perform.

Ruth Wyand is one of the most accomplished Outer Banks musicians. She has been recognized nationally for her fusion blues and jazz finger picking style. She has a dry, very quick wit, and in introducing one of her songs, she was able to deflect a bit from a difficult personal story.

“You can learn more about me from my songs and from my music then I’ll ever tell you…except for this song,” she explained.

The song reflects on a frightening time in her life. In 2019, a black mold infection she believes came from one of the places where she was performing almost cost Wyand her livelihood and passion.

“I woke up and my voice was totally gone. It was diagnosed as vocal cord dysphonia. Which kind of sounds funny, but it’s not,” she said. “I was going to vocal therapy at Duke for about a year learn how to reuse my voice, learn how to sing. I still don’t have the confidence or have a high range that I used to. But it helped me to interpret songs a lot differently, songs that I’ve been doing for 20 or 30 years I had to relearn and re-address.”

That helped create a new song. “I thought, ‘what would [it] be like to wake up and not having music?’” she continued. “This next song is called Today Is the Tomorrow I Feared.” The stories the musicians told were stories of their lives. Matt Maguire talked about growing up in West Virginia, how close he was to his grandmother and the memory of a giant willow tree at her house

“When she passed, for some reason the willow tree died, and they had to cut it down because it was just dying.” he said. “I was there and watched it come down. It was awful.” It took a while for the song to come together he said, but from that came a moving lament and contemplation about life and its transitory nature.

Ben Saltzman’s first song, Daddy Got the Bear, was at once humorous and poignant. It tells an imagined story about a young boy whose father drinks too much and keeps telling the same story over and over again.

“It’s been 27 years since Daddy got the bear,” are the lyrics as the song near its end, telling of a story that has been told over and over again.

Craig Honeycutt, who played host to the musicians on stage, has had a career that includes a stint in Los Angeles and more than 20 years of writing music. That has involved a lot of travel, and he pointed to how inspirational that can be.

“I’ve always had a fascination with hubs. Airports, truck stops, train stations, because I find stillness in the noise,” he said. “I like to just sit and watch people on their way to places. I like to look at the travel boards, where things are going to and coming from, because it sparks my imagination that in this world we’re so connected and there’s so much adventure out there and so many points unknown.”

From that observation came lyrics that seem to encompass the spectrum of the human experience.

For the musicians on stage, it was somewhat different experience than what they are used to. All of them commented at some point about how much they enjoyed having an audience listen quietly and, they felt respectfully, to their music.

For Saltzman in particular, the afternoon took him away from his comfort zone.

“I’m the front man of a rock band [Stereo in Words]. I feel more comfortable with a Fender Stratocaster on me than an acoustic guitar,” he said. “But all of those songs were written on an acoustic.”

For Aida Alverez and her OBX Hippie Productions, she is hoping this is the first of series.

“It was really a dream come true,” she said. “I feel excited to plan the next one.”