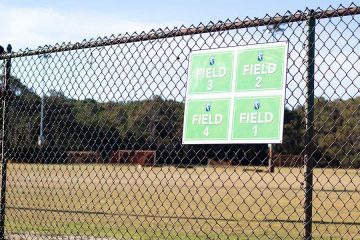 Many area coaches, players, parents and other sports enthusiasts agree. The county’s growing population, coupled with an increasing interest in sports, especially soccer, has led to a demand for more and better athletic facilities and playing fields.

“The need is now,” said Jamie Varnell, a local parent who has been advocating for those facilities. “I feel like it’s a problem for everyone on the beach—all youth sports. We know it is. It’s clear. It’s the bottleneck that is only going to get worse.”

“I think in one sense, it’s a good problem to have, that we have so many people wanting to play and train throughout year—not just youth, but adults,” said Ralph Cleaver, head soccer coach for Manteo High School (MHS).

The OBX Storm Soccer Club has fall and spring seasons. According to Jeff Scott, president of OBX Storm’s board of directors, the biggest problems are the quality of the fields as well as lengthy field closures.

“We’re kind of limited because the fields get closed,” Scott said. “Fields elsewhere don’t close. They may close briefly, but they don’t close for months at a time, which is what we deal with here.” He added that the fields that Storm teams play on when they travel elsewhere “are typically better fields than we have.”

Tim White, Dare County’s public services director, did not respond to the Voice’s requests for comment about the field closures.

Tennis courts and the high school track and football fields are open year-round for both tourists and locals to enjoy, but “soccer fields are locked half the year,” said Amy Powell, whose son Trent is a former First Flight High School (FFHS) and collegiate soccer player.

“We do so much for the tourists, but what about our youth?” she asserted. “Kids are jumping fences to practice or play pickup games…and getting threatened with arrest. This has to stop.”

Juan Ramirez, FFHS’ head soccer coach, said he thinks more fields are needed around the county. He declined to speak on specifics of the high school soccer field closures but noted: “We got so many teams and so many players wanting to use it, that it’s tough.”

For her part, Amy Powell suggested fields being closed and opened on an alternating basis “until a much-needed turf field is established.”

Others have been pressing for such fields. Varnell and Molly Garavito, another local mom, spoke during public comment at the May Dare County Commissioners meeting about the need for converting the Nags Head Soccer Complex fields off West Satterfield Landing Road to artificial turf so they’d be usable year-round. They also sent board members a detailed presentation on the subject.

Garavito said she has been coaching both Parks and Recreation and Outer Banks Youth Soccer Association (OBYSA) teams for years. Her three boys all play soccer and lacrosse. “It’s great there’s that much interest,” she said. But the county recreational facilities that were established over 20 years ago for the population then, are “not adequate” for today’s population, she added.

“The initial rumblings, I’ll say, were when we were trying to coach and just trying to balance the amount of interest in using the fields,” Garavito said. “There are a lot of teams that couldn’t even get their one-hour practice a week on the field with what we already had established—and this was before they shut down Satterfield [Nags Head Soccer Complex] all last spring.”

“I’m not a huge fan of artificial turf, but I think a couple of fields down here might be essential,” said John Van Lunen, president of OBX Lacrosse Club and coach for the men’s lacrosse team at FFHS.

He’d like to see the FFHS stadium, which is used for football and men’s and women’s lacrosse games, turfed so that it could also be used as another location for practices. And turfing the Nags Head fields would allow for a venue for lacrosse tournaments in the spring, soccer tournaments in the fall and camps in the summer, Van Lunen said.

“It would actually be nice to see some kind of destination created, because we’re tired of traveling out to other places to play other people; so there’s plenty of benefits,” he noted.

Bob Woodard, chairman of the Dare County Board of Commissioners, said in an email that the board and county manager are currently dealing with multiple Parks and Rec issues. He directed the Voice to the county manager for additional comment.

County Manager Bobby Outten said he and the county commissioners met with a turf company several times, but the installation cost at the Nags Head soccer complex would have been about $2 million. He added that along with replacement costs in the future, creating an “almost impervious base” would lead to stormwater and town ordinance considerations for allowable lot coverage. The board opted to instead pursue the addition of lights and three additional grass fields behind FFMS, which comes at less expense.

“We don’t have any plans to turf any of the fields as we speak,” Outten said. The lighting and additional fields project, plus upgrading baseball fields in Kitty Hawk, will happen soon, but he said he didn’t have an exact timeframe for those.

Further out, the facilities plan is to “upgrade everything,” Outten continued, adding that county’s priority for its facilities are county Parks and Recreation activities, but that it welcomes other athletic clubs and groups to also use them.

Varnell and Garavito say they offered to fundraise and apply for grants to make up the difference in cost for turfing the Nags Head Soccer Complex, but say they never heard back from commissioners.

Cleaver said that he and the staff with the nonprofit Premier Soccer Training had made a proposal to the county to raise money to convert the old tennis courts at College of The Albemarle’s Manteo location into a futsal court for community use. Futsal is a growing, smaller-scale version of soccer played on either an indoor or outdoor court. He said the response they received was positive, but as it turned out, those courts were torn down.

Susan Gray, director of the Fessenden Center on Hatteras Island, said she believes people use the Parks and Rec field in Hatteras when it’s technically closed. “But you know, it looks fine. I haven’t had any big problems or anything out there.” The county recently ordered an architectural study of all its facilities “because we’re outgrowing our facilities,” Gray said.

She said, among other amenities, the Fessenden Center could use another gym, more pickleball courts and another field. The center’s property backs up to the sound and includes unusable marshy land, so the county would need to purchase a new tract of land for such facilities.

Once built though, Gray said additional outdoor facilities would be “totally manageable” because they don’t require staffing, yet “it’s available dawn-to-dusk for everybody. It’s ideal… The more outdoor facilities we have, they’ll be used. I feel 100% about that.”

Additional fields “would make our soccer practices easier,” she said. It would allow teams to practice earlier, eliminating the need for 6-7 p.m. practices, which would let kids get home earlier on school nights.

Gray expects the county to procure the land in upcoming years. “There’s no reason to think that they won’t. They know we’re busy down here. They want to help us out the best they can; I know that.”