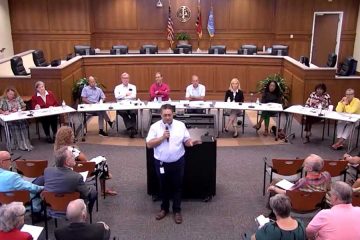 A federally qualified health center (FQHC) in Manteo is slated to open its doors sometime next spring, according to Joe Rockenstein, CEO of the Ocracoke and Englehard, N.C. Health Centers.

Rockenstein provided the update during the Dec. 6 Manteo Healthcare Task Force meeting, where he said his organization, which includes the two nearby health centers and is governed by the Health Resources and Services Administration (HRSA), plans to sign a lease agreement at 402 Budleigh Street and begin working to renovate the building and gain HRSA acceptance by the end of December.

“After months of discussion and weighing options, my board of directors decided that it would be best for us, for expediency purposes, to get into a rental agreement for the building,” Rockenstein told the Task Force at the meeting. “At least on a short-term basis, and possibly longer, it would suit the needs for us in providing medical services in this area.”

“My initial time frame and hope is that by the springtime, at some point, we can be operational and seeing patients at that point. So that’s not very far away,” he added.

The news of a new health center in Manteo comes amidst what some have described as a healthcare crisis on the Outer Banks. This spring, more than 2,400 patients of Outer Banks Family Medicine in Manteo were notified they no longer could receive care there due to a doctor shortage.

Since then, the Outer Banks Hospital and Outer Bank Medical Group have been working to expand primary care services in Manteo as well as in other locations on the northern Outer Banks.

Federally qualified health centers (FQHC) are facilities that apply for and receive federal grants and whose charge is to serve the underserved population. Governed by the Health Resources and Services Administration (HRSA), FQHCs have a mission to create whole-person care – which integrates physical, mental and dental health care – without any financial barriers, as well as to bridge the gap in healthcare service for Medicaid, Medicare, uninsured and underinsured individuals.

Due to its funding structure and mission, the clinic will charge fees based on a patient’s income for both insured and uninsured patients.

“First and foremost is that regardless of ability to pay, there are no barriers to care and there never will be,” Rockenstein stressed. What enables FQHCs to do that, he explained in a Voice interview earlier this fall, is grant funding from the federal government as well as the ability of FQHCs to receive enhanced reimbursement for Medicaid and Medicare.

Once operational, the three centers — Ocracoke, Englehard and Roanoke Island — will be part of one larger entity. In 2014, the Ocracoke and Engelhard locations joined together as one organization and have since operated as federally sponsored health centers.

Rockenstein told the Task Force that his organization would begin engaging contractors for the design and renovations at the site and would also be advertising to fill between six to eight positions at the center.

He noted that Dr. Jennifer Harrison, a local physician and former provider with Outer Banks Family Medicine in Manteo, will be on staff and assisting with interviews to ensure that the right providers are brought in. Rockenstein said he has been working with the East Carolina University School of Dentistry to potentially attract recent graduates to the island.