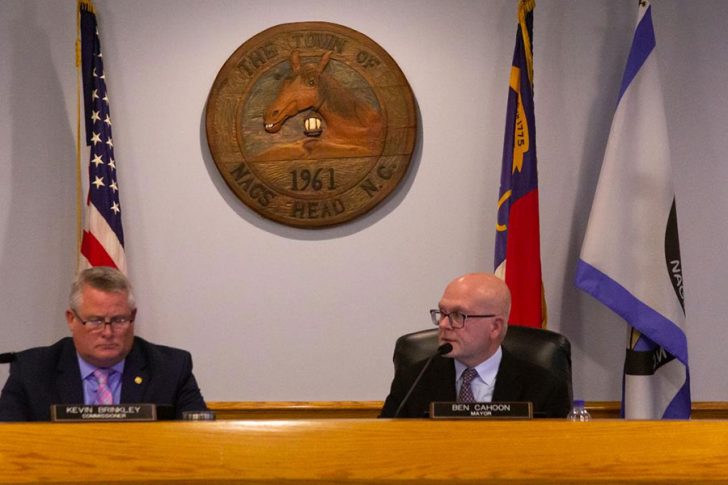 By a 4-1 vote at their Jan. 4 meeting, the Nags Head Board of Commissioners approved a zoning text amendment to remove multifamily residences as a permitted use in the town’s C-2 General Commercial District.

This followed an Oct. 19 vote that established a 150-day moratorium on development in the town’s “historic character area” between Danube and Hollowell streets between U.S. Highway 158 and N.C. 12.

Planning and Development Director Kelly Wyatt said at the meeting that the moratorium was adopted to limit development in the historic character area “until the town can develop and implement appropriate standards” for such development.

Only Mayor Ben Cahoon opposed the zoning text amendment, which the town’s planning board initiated and unanimously adopted in its Dec. 19 meeting.  Cahoon noted that multifamily residences have been a longstanding use in the C-2 District, predating much of the other development.

“We’re taking an essential use off the map and off the table for a large area of the town,” Cahoon said. “The C-2 is not just the area that’s been referenced repeatedly. C-2 is virtually everything between the highways in the town and much of what borders [U.S.] 158 on the west side of the highway.”

While supporting the amendment, Commissioners Kevin Brinkley, Renée Cahoon and Bob Sanders all expressed their view that the text amendment was likely a temporary measure.

“We need to do work on our end,” Brinkley said, observing that even some of the town’s definitions sometimes contradict themselves.

During the public hearing at the Dec. 4 meeting, six property owners spoke in favor of commissioners adopting the amendment, while three business owners spoke against it.

Several of those who spoke in favor cited the proposed 54-unit housing development that the Woda Cooper Companies, Inc. was hoping to build in the C-2 Zone as part of the county’s push for more essential housing. That proposal had generated considerable pushback from some in the community. In addition, Nags Head town staff produced a report concluding that many local workers earned too much money to meet the income requirements needed to live in the complex.

“I’m here to speak against the Woda Cooper project,” said Clara Mackenzie Smiley. She said her father bought a property in the historic district in 1969 and four generations of her family have vacationed there.

“It was a neighborhood then, as it is now, characterized by well-maintained, single-family cottages and supported by family-run businesses,” she added. “The Woda Cooper project would change the very character of our neighborhood in ways that would not be in keeping with what we and our neighbors invested in and want to preserve for future generations.”

“When I heard about the Woda Cooper project, I was very surprised and disappointed,” stated Frank Campanelli, a New Jersey resident who said he and his wife are hoping to retire here.

Debbie McConnell said she emailed several concerns to commissioners, “but I’m here today just to emphasize for those that say it’s a ‘not in my backyard concern;’ for us, it’s what we see in our front yard.”

Conversely, Bobby Harrell, a Roanoke Island resident who has owned businesses in Nags Head’s C-2 district for the past 22 years, asked commissioners to stay the vote for 30 days. He indicated concern that the vote was happening at the end of the holiday season.

“Research has identified the hospital alone needs 40 units for housing,” Harrell noted. “Eliminating multifamily housing will affect most of the area,” he said. “I don’t feel like people were given proper notice to study and understand what effect it might have.”

Peter Pinto, a Duck resident, said he and his partners own multiple properties in the C-2 district. “Our existing projects have been positively received by the Nags Head community,” he said, naming the Tar Heel Motel and the Sugar Creek Condominiums.

Pinto echoed Harrell’s sentiments, adding that “I think we’re all aware this is holiday season, and frankly, we were taken by surprise that this was put in at the time and manner in which it was.” He also said he has development plans in progress in Nags Head, stating that “we made significant expenditures of time, money and resources in good faith based on the uses that were approved in the town when we purchased the property.”

Commissioner Mike Siers later clarified with the town attorney that only properties without already approved applications or approved permits would be affected by the zoning amendment, to “make sure he [Pinto] was covered.”