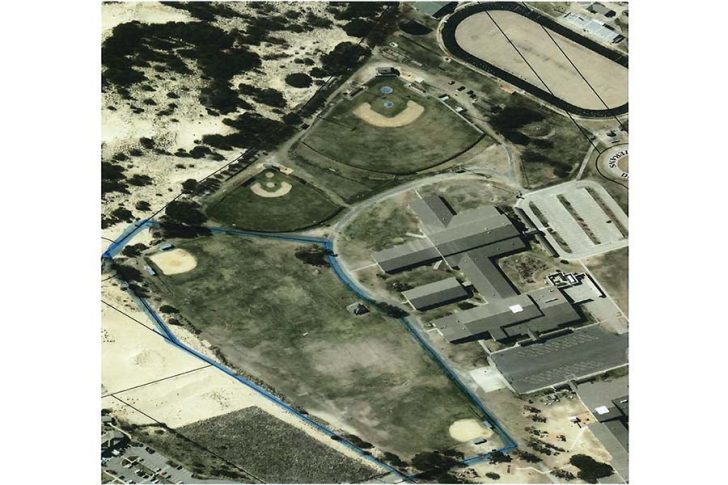 Outlined area shows playing fields that are the focus of the new agreement.

School Board Attorney Brian Shaw told school board members on Jan. 9 that the MOU pertains to the athletic fields behind the First Flight schools complex in Kill Devil Hills, and that the document allows county use of the fields “in times the schools are not using those fields. That would be a resource to the county and its citizens. And in return for that, the county has generously offered to provide some upgrades to that property in consideration of the county usage of it.”

Dare County Manager Bobby Outten told the Voice in an interview that the MOU originated with the county. He expects the Dare County Board of Commissioners to approve it at its Feb. 6 meeting.

“I see this as another wonderful opportunity for Dare County Schools to partner with our County in a way that will benefit the children in our community,” said Basnight in a statement to the Voice. “Not only will our young athletes have additional field space on which to participate in Parks & Recreation programs, but our First Flight students will gain upgraded fields to use during school hours.”

The document pertains to the grassy field area behind First Flight Elementary School (FFES) and First Flight Middle School (FFMS), according to a map attachment on the MOU. The area, when lined, “brings two and three-quarter new fields into the system that can be then used for all the various demands for field time,” Outten said, explaining that one field is smaller and thus a three-quarter-sized field.

“The big deal is they’re going be lit fields, and that allows them to be used in the evenings after school for practices and games,” Outten stated, explaining that would take some of the field use demand “pressure off the weekends.”

The county “will keep and maintain the fields, concession stands, bathrooms, if any, and the improvements located upon the fields, at a minimum to their condition at the time of this agreement” as well as “mow and line the fields appropriately for FFMS and FFHS scheduled athletic activities,” according to the MOU.

The county allocated close to $800,000 for the field upgrades, Outten said, most of which will go toward the installation of lights, which the area currently lacks. Other plans involve getting the sprinkler system up and running, painting and “cleaning up” the dugouts, as well as improving fencing around the fields.

While Outten acknowledged a likely eventual need for bathroom facilities, he said money is not currently allocated for building any new structures. As soon as commissioners approve the MOU, improvements could get underway, and Outten expects they could potentially be completed by late spring.

“We were looking for ways to solve their problems as well, so we started that process a while back, and this is what it evolved into,” he said. “In earnest, we started back in the fall planning and trying to get ideas and bids and costs.”

School and county officials have met, walked the fields together and discussed each side’s issues “and what we need to do to work together,” Outten said. “It’s been a very amicable win-win relationship with both groups.”

Not having yet seen the schools’ activity schedules is “the only outstanding issue,” Outten noted, explaining that if the schools would use the fields “all the time,” leaving them unavailable for county recreation purposes, that would be the only reason to potentially not sign.

“The whole point of this is to create more recreation opportunities,” Outten said. “I don’t think that’s going to be a problem, but I haven’t seen the schedule yet.”

FFES, FFMS and First Flight High School (FFHS) have usage priority for the fields and will provide the county with a schedule of field uses before school starts each year, so the county can schedule around them, according to the MOU.

“The schools and the county have worked well together for a long time,” Outten said. “This is the first time we’ve really formalized it. Since there’s significant money in it, we want to be sure everybody’s on the same page.”