‘You never know what’s gonna walk through the door’ 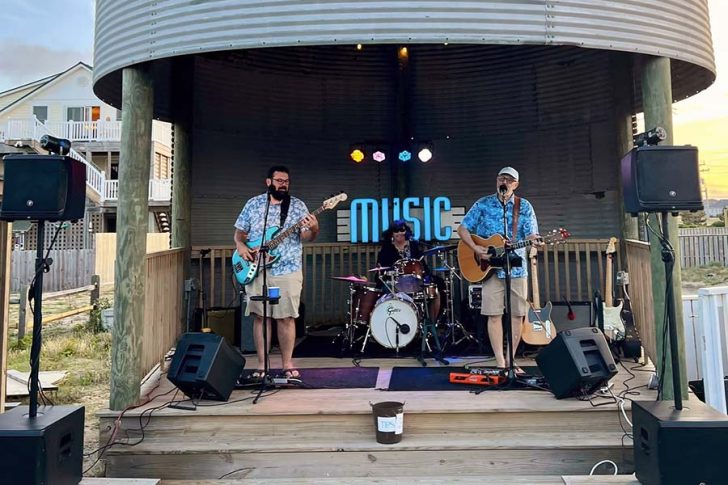 It’s a Wednesday night in January at Art’s Place on the Beach Road in Kitty Hawk. Local musician Monte Hooker has set up some chairs at the back of the dining area with couple of microphones, amps and whatever else may be needed for the weekly open mic. For Hooker, who’s been playing music since he was nine or ten, it’s a comfortable place to be.

Hooker has been at the center of the Outer Banks music scene for over 35 years now. He and his group, the Mo-Rons, are a regular part of the area’s summer music scene and even in the offseason, they play three or four times a month. He’s probably best known now, though, for hosting the weekly open mic at Art’s Place.

“It’s a lot of fun. You never know what’s gonna walk through the door,” he said, describing a special moment that happened earlier this month when a Nepalese family came to the open mic.

As Hooker describes the family, the son had been born in the United States, and the parents spoke English but with a Nepalese accent. The son borrowed a guitar, sang a few songs and the father helped, holding a phone up for words and chords.

Hooker noticed the dad singing along and asked if he played. “Sure,” he was told. Using Hooker’s guitar, the dad performed a song, but he didn’t seem comfortable. Asked about what would be better, the dad answered, “I’m used to playing traditional Nepalese folk music, and I said, ‘Play that…It’s open mic night.’”

“He proceeded to play two songs and he sang in his native language. It was fantastic,” Hooker said. “I’m thinking to myself, ‘Middle of January, Art’s Place, and we’re having Nepalese music. I love my job.”

Raised in Elizabeth City, Hooker started playing music when he was nine or ten. There were piano lessons, but it was the wrong music. “It was classical stuff…gospel, Christmas songs…and I wanted to learn Elton John and Billy Joel,” he said.

Hooker was pretty typical kid and played sports in school—mostly basketball and baseball. He started playing the drums, which is how he came to play guitar. He and some friends would get together at his house and “make noise.”

“One of my friends broke his hand, so I started messing around with the guitar,” he said. “I wouldn’t say it was easy…because you got to build your calluses. It was just ‘I can do it. I can make some chords and with AC/DC coming out and stuff like that, a lot of one, two and three chord songs, I can do it.’”

He went to Appalachian State planning on majoring in Urban and Regional Planning. That didn’t work out, but he did get exposed to more music. Hooker’s guitar playing came to the attention of the Music Department head. He never majored in music, but he did tutor music majors on guitar.

There was always a wide variety of music in his life. He recalls a childhood that included the Jackson Five, Gordon Lightfoot, AC/DC, Def Leppard and a Roy Clark concert that has always stuck with him.

“I love Roy Clark,” he said, explaining that he saw him perform “when I was young out in Gatlinburg, Tennessee with my parents, and he was phenomenal. I was really young, but I remember the show.”

It was in college where he began to understand what he wanted to do with music.

“In my college days I was pretty big Van Halen fan. I was able to see Van Halen and get right up on the barricade at the Charlotte Coliseum. I could see that big smile on his face, and he was having a ball doing it,” Hooker said.

That was a moment of inspiration.

“The main thing I got from all of it was have fun with it…There’s a billion people on the planet that can blow me away on the instrument playing. But there’s not a soul has more fun doing it than I do,” he said.

College didn’t work out, and by the 1980s, he was on the Outer Banks learning how to be an electrician and playing music. By 1988 he had his electrician’s license, was married to his wife Ann Lassiter and often playing with two bands.

These days he plays with just the Mo-Rons, which includes Scott Nickens and Ali Shields, usually playing a couple of times a month in the offseason and a lot in the summer.

One of the groups he was playing with in the 80s and 90s was Bitter Creek. He had been doing sound as well as guitar and occasional vocals. When they broke up, he bought the group’s sound system and began a second career in music

“In the early 90s I set up this PA system club where Waveriders is. Upstairs used to be Woody’s,” he said.

Some well-known bands would stop by. And he got to know a lot of them.

“Hootie and the Blowfish, Dave Matthews guys played there,” he said. “Derek Trucks…for several years there when he was” in his early teens, he said.

It led to some lifelong friendships. “We get a Christmas card from Hootie and the Blowfish every year,” he noted.

“A couple of folks offered me chances to go do tours with them,” Hooker added, before explaining why he opted against life on the road. “My son was born…I just want to remain here and watch him growing up.”