‘It just depends on the year or day you pick’

What part of OBX is an island and what part is a peninsula? 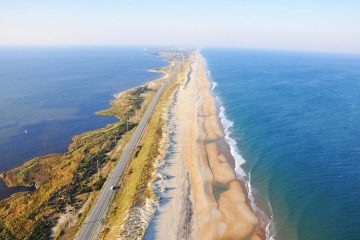 On a barrier island, the only constant is change. (Outer Banks Visitor Bureau)

On a barrier island, the only constant is change. And that certainly holds true for the question of whether the Outer Banks—and particular pieces of it—are actually a peninsula or an island.

“A lot of times, when you’re staying on the Outer Banks, someone will say ‘welcome to the island.’ And of course, it is no longer an island, and hasn’t been an island since around 1830 when New Currituck Inlet closed,” said Roger Payne, geographer, toponymist, locational analyst, and the author of the book, “The Outer Banks Gazetteer: The History of Place Names from Carova to Emerald Isle.”

What Payne calls a peninsula is the northern portion of the Outer Banks, from Bodie Island to Corolla that is part of a peninsula going all the way up to Virginia Beach. (For the record, Bodie Island is now a peninsula, not an island.)

According to Payne, Roanoke Island, Ocracoke, Hatteras, Pea Island, and Colington are in fact still islands. But when New Currituck Inlet closed, the stretch of land between the Back Bay National Wildlife Refuge in Southern Virginia Beach all the way down to Oregon Inlet at the tip of Bodie Island became what is referred to by geographers as a spit — a stretch of beach material, in other words sand, that projects out to the sea and is connected to the mainland at one end.

“That is the geographic terminology for it, which of course translates into common language as a very long, thin peninsula,” says Payne.

Mike Bryant is a local biologist who retired in 2016 from the U.S. Fish and Wildlife Service after almost four decades managing refuges, with the past 20 years spent as the refuge manager for six national wildlife refuges in eastern NC. He is currently President of the Coastal Wildlife Refuge Society.

According to Bryant, the transformation from island to peninsula has actually been a process of constant change that has been recorded since the late 16th Century, when the first European settlers discovered these shores, as various inlets have opened and closed over the last 500 years.

“So it just depends on the year or day you pick,” he said.

While Bryant and Payne say the Northern Outer Banks has been a peninsula for nearly two centuries, sections of it have made the transition between island and peninsula at multiple times over its history. Payne noted that as the inlets were opening and closing, they broke up different sections of the peninsula into islands, and they all had names while they were in existence.

Going further south there was Port Trinitie, named by the Europeans when they discovered the islands. Right around Whalebone Junction there was Roanoke Inlet, which made Bodie Island an actual island until it closed in the 1700s. South of Nags Head there was a famous port called Port Fernando, and just north of that was a very small, very short inlet called Port Lane.

Along with his research, Payne interviewed 500-600 people to come up with accurate maps of the former inlets and islands which can all be found in his book. It’s not lost on him that people are confused.

As he explains, Bodie Island is not an island, Pea Island is an island, but has gone back and forth between island and peninsula many times, and only just recently became an island again in 2011. Even Banana Island, which tourists and young locals like to frequent in the summertime, is not actually an island – it’s a spit.

Bryant says he also understands why it may be confusing.

He also attributes the assumption that the peninsula is an island to the fact that people now only have to see what’s right in front of them. We have Google Maps and can just type in our destination and get there. No need to study what’s on a map.

“People just think okay, this is as far as I can go. I can see sound on one side, and I can see the ocean on the other – it must be an island,” says Bryant. And with the extreme power of the ocean, and the increasing effects of climate change, he doesn’t count out the possibility that that the status quo could change at any moment.

“It’s like a surfer looking out at ten-foot waves going ‘Whew, man, that’s massively beautiful and also frightening to think that I’m going to go out in that. It’s like going into a hamburger maker,” he says. “God forbid we have a Cat 4 Cat 5 storm; it could form an inlet in a place that could make a big long chunk of it an island again for a while.”