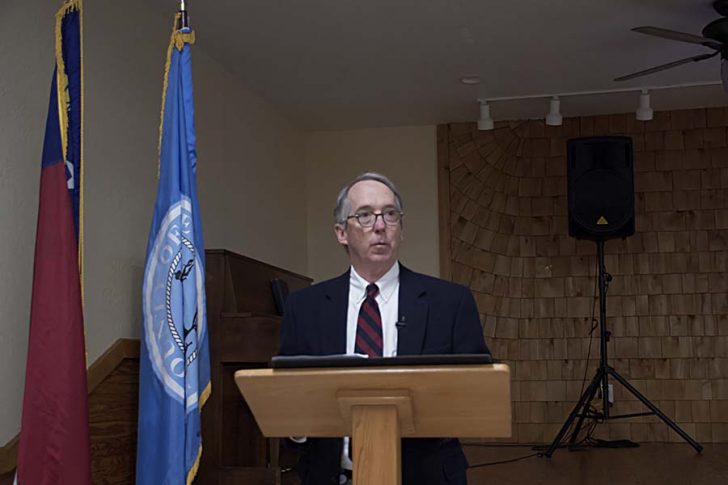 Speaking before a packed Rodanthe community meeting, as well as a number of online participants, Dare County Manager Bobby Outten outlined the challenges facing a beach nourishment option for Rodanthe.

For Rodanthe residents, nourishment has become an increasingly critical issue as the ocean moves closer to shoreline properties and washes over dunes affecting roads and infrastructure and leading to the collapse of homes in the past year.

Outten’s message was straightforward—currently there are no funds for a nourishment project in Rodanthe. He explained that the county and towns have just completed the 2022 renourishment projects and the funds, which are raised through occupancy taxes and property taxes, are depleted.

Outten began his talk telling the audience that “The only way we can all work off the same sheet of music and get to the same conclusion is if we’re all working with the same facts. So tonight we’re going to try to lay out beach nourishment 101…where we’ve been and how we got here.”

His talk took the history of nourishment projects back to the 1980s, a time, he said, when “…almost no community in their county thought it was a good idea to do beach nourishment.”

Nags Head was the first town in the county to try beach nourishment, hoping originally to take advantage of a program that would have funded the project with 70% federal money, 20% state and 10% local funding. However, the federal funds were never available. The project finally moved forward in 2011 with the county and Nags Head equally sharing the approximately $36 million price tag.

At that time Nags Head created Municipal Service Districts (MSD), allowing the town to levy an additional tax on properties that would benefit the most from nourishment. That means of funding is key to how projects continue to be paid for throughout the county.

After the Nags Head project, the towns north of Oregon Inlet entered into an agreement with Dare County and the towns sharing the cost of nourishment. At that time the county also moved forward with projects at Buxton and Avon. The county and towns finished beach nourishment projects by October 2017.

Outten explained that currently, new sources of revenue do not seem to exist. Although a law establishing the 70% shared funding between the federal government and towns is still on the books, Congress has not authorized money for it. The county has asked state legislators about the possibility of raising the occupancy tax and the answer was an emphatic no.

“The last time we went to ask for that, we were told, not only no but ‘h… no” and don’t come back anymore,” he said.

Outten also pointed out that even if a Rodanthe MSD was created using the same formula the county uses for Avon and Buxton, that would only represent an additional $636,000, well short of the approximately $20-$30 million needed for the initial phase of a nourishment project for the 2.5 miles of Rodanthe beach.

Questions from the audience, though, called into question whether beach nourishment in Rodanthe is solely a county issue. Cape Hatteras National Seashore (CHNS) beach property extends to the mean high tide line, making all Outer Banks beaches from South Nags Head to Ocracoke part of the National Park Service.

Jeff Ferebee of Camp Hatteras said federal dollars for the NPS might be used for nourishment. (Photo credit Kip Tabb/OBV)

“Specifically, the Act declares that the National Park Service has a dual mission to conserve public resources and provide for use and enjoyment in such a manner and by making such means as will leave them unimpaired for future generations,” Ferebee said.

He then told the audience that through the bipartisan Infrastructure Act, the Great American Outdoors Bill and NOAA funds earmarked for climate change mediation, there is well over $3 billion in funding has been earmarked for the NPS system.

“Congress has billions and billions of dollars that is set aside for public service. We’re just looking for 20, 30 million,” he said.

But CHNS Park Supervisor Dave Hallac pushed back, pointing out that there are 424 national parks in the system and every one of them is vying for some share of the money. He also noted that much of that money will be applied to projects that have been put off for years.

Additionally, Hallac told the audience, nourishment projects require ongoing funding for maintenance. The NPS, which is funded annually through Congress, would not necessarily be given the money for renourishment.

Although officials were not optimistic about the prospects for a nourishment project in Rodanthe, Outten did point out there is a study of the Rodanthe beach being done at this time.

“The next step for us is to get the study, which we should have in the next 60 days or so and put a price tag on it. Once we have a price tag, we know what we’re asking for,” he said.