WHAT TO WATCH ON TV
Stream On: Pure cinema—‘Koyaanisqatsi’ 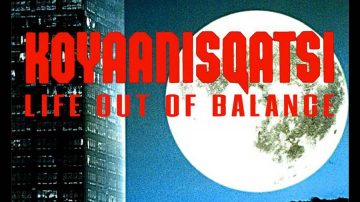 In 1878, Scientific American published a series of pictures depicting a horse in full gallop, along with instructions to view them through the zoetrope, a simple toy that made it possible for a series of pictures to be viewed in rapid succession, creating the illusion of motion.

It wasn’t long before a sequential photo projector—the zoogyroscope—was developed, in 1879, followed by the Kinetograph, a primitive motion picture camera, in 1890. These led to modern motion pictures, but throughout the years, movies’ subjects have mostly incorporated concepts from the other arts, especially literature and theatre. There are very few examples of movies that use only cinematography to tell their story, a notable one being Koyaanisqatsi.

TL;DR: Koyaanisqatsi is a beautiful visual tone poem using only moving images and music to serve the message that humanity has shifted the balance of nature. “Koyaanisqatsi” is a Hopi word that means “Life out of balance.”

“It’s not for lack of love of the language that [this film has] no words. It’s because, from my point of view, our language is in a state of vast humiliation. It no longer describes the world in which we live.” (Director Godfrey Reggio)

This is another film I learned of from a videocassette tape borrowed from a friend. My mind reeled as its slow-motion, static, and sped-up images succeeded one another, accompanied only by minimalist instrumental and choral music. (The few words that were sung were in the Hopi language, mostly “Koyaanisqatsi” chanted over Phillip Glass’ score.)

It doesn’t have a traditional narrative, but the visual narrative gradually builds until its message is delivered. And even until then it’s a fascinating watch.

After the MGM Lion opens the movie, on the screen appears: Francis Ford Coppola Presents, the word KOYAANISQATSI appears in red on a black background and Phillip Glass’ hypnotic score begins playing: bass baritones rhythmically chant the word slowly over a repeating motif. On the screen now are dark humanoid shapes around a larger, crowned one, drawn on a red cave wall. The camera pulls back slowly and flame fills the frame, a slow-motion explosion that resolves to red debris falling from the sky: we see it is the detritus of the launch of a space rocket (Apollo 11).

The chanting continues but the music has raised an octave. The camera lingers over the launch-pad, post-liftoff, which fades to beautiful aerial shots of landscapes, deserts with mountains. The chanting has stopped and the music settles in.

The desert survey looks like drone footage; in 1975 it was shot from airplanes and a helicopter. (Cinematographer Ron Fricke almost passed out; he had never flown in a chopper before.) Director Reggio and Fricke had decided to shoot unscripted footage and edit it into an hour-long film.

Then swarms of bats flying out of caves; then birds. The music shifts to “Cloudscape” and the camera turns straight up to light and dark clouds, all time-lapsed. The sun can be glimpsed. What we often see from airplanes: a floor of clouds, but roiling.

Waterfalls now, and vast oceans, some in rain, sparkling like diamonds. More clouds and the music builds in intensity. High ocean waves that look like molten glass and silver, as we on the Outer Banks often see in surf photography. Musical fanfares.

Aerial films of lush green mountains pass beneath the camera to a river valley. Now the colorful geometric shapes of planted crops. What looks like a fortress stands atop a desert island in a lake in the desert—it’s a natural formation.

Then, inexplicably, mountains exploding—until we see in close-up, earth-moving machinery with a red “6” painted on the front. A man climbs aboard and it is covered in black smoke and dust. Hydro-electric dams. High-tension wire towers stand looking like hieroglyphics on the edge of a desert. The music, like the images, is now heavily industrial. A nuclear test from the ground, but miles away: a red and white mushroom cloud erupts from the desert floor and climbs into a deep blue sky before it turns black and then dark blue.

At 23 minutes the music stops and people are lying on a beach. “Vessels,” a female chorus, begins and the camera pulls back to reveal a nuclear generating station dominating the horizon, full-frame. Now the shots are filled with people—on highways, in cities, flowing through Grand Central Station like scurrying ants. A glass city skyscraper that seems transparent, because it’s reflecting the sky. Taxiing airplanes appear in heat-distorted air and approach the camera before turning onto runways. The music grows frenzied. It appears that humans have overrun the place.

Parking lots with thousands of colorful cars … row upon row of army tanks. Fighter jets. The singers almost seem to be gasping for air. A camouflaged airplane over the painted desert. A bomb drops and explodes. An intercontinental ballistic missile shoots out of the ground. From the air we see a battleship—on the deck is written “E=mc2.” Trucks and planes explode in a field. A bomber drops bombs like a seahorse sprays eggs.

The second half of Koyaanisqatsi shows people at street level. Walking through New York City in slow motion, time-lapsed crowds surging through stations by the thousand. Individuals posing for the camera (they thought it was a still camera). Waitresses in Las Vegas. “The Grid” plays to shots of skyscrapers at night looking like beehives. Crowds in video game arcades, bowling alleys, malls, a “Twinkies” assembly line, crowds in food courts, all sped up to a frenzy.

After a quiet section in which aerial shots of cities are compared with circuit boards, to “Prophesies,” an airy piece of music. We are flying over a spread-out city at night. A baseball stadium. People walk by the camera on city streets and look into it. An old man, apparently looking at the camera, shaves with a disposable razor. A woman taps her lighter after it fails to light her cigarette. EMT’s stoop to lift a homeless man onto a stretcher. People pick through rubble after an inner-city fire. The vocalists sing what sounds like a requiem. Ghosts move across the floor of a stock exchange.

White debris again falls from the sky in a tight shot; it’s the launch of another rocket, which lifts off majestically, the music climbing with it. The “Koyaanisqatsi” chant returns, the rocket flying upward into the sky—until it explodes silently, to no change in the measured music and chanting.  The final eight minutes of the movie tracks the flaming debris back into the atmosphere. We come back to the opening cave with the drawings and this text appears on-screen:

“ko•yaa•nis•qat•si (from the Hopi language), n. 1. crazy life 2. life in turmoil. 3. life out of balance. 4. life disintegrating. 5. a state of life that calls for another way of living.”

Director Reggio met Francis Ford Coppola through an associate at Coppola’s Zoetrope Studios. Reggio arranged a private viewing after which Coppola said the film needed to be seen. Reggio added Coppola’s name to the credits and Coppola helped with the distribution. I don’t know and don’t care what the critics thought of Koyaanisqatsi; I don’t even agree with the film’s premise that life is out of balance, but it needs to be seen, and happily it’s streaming, free (ad-supported) on several platforms. Take an hour and a half and check it out.