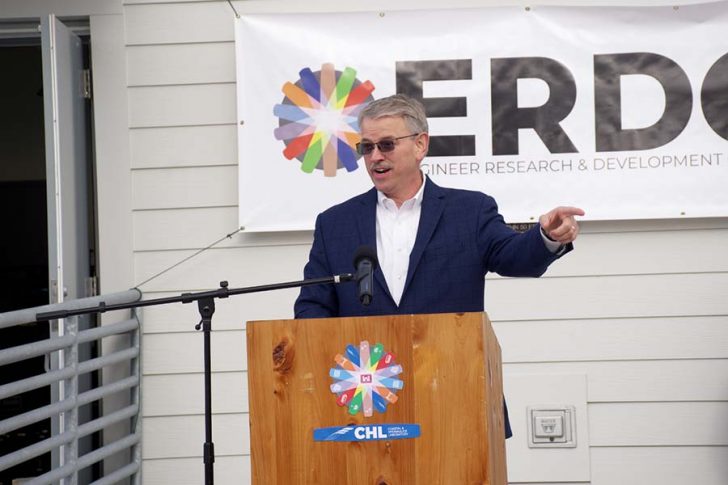 Dr. David Pittman, ERDC Director, recalled the history of the USACE and how important it has been to the military and civilian life in the US. (Photo by Kip Tabb/OBV

With the Jan. 19 ribbon cutting at the new Engineer Research and Development Center (ERDC) at the Army Corps of Engineers Field Research Facility (FRF) in Duck, the world class research center is expanding its work to include cutting edge applications for the military.

“We’re super excited to have this new building and this space that will support our research team here, to have our instrumentation and to really continue to grow the capabilities of the FRF,” she said.

The FRF, perhaps better known as Duck Pier, has been recording nearshore ocean activity since it opened in 1977. That 46-year record of ocean activity is unique in the world of science, something Dr. David Pittman, ERDC Director, noted in his remarks before the ribbon cutting.

“This facility is actually in the Guinness Book of Records,” he said. “It’s the longest continuous monitoring of waves current, imagery beach, everything has been measured…Internationally, this place is famous for what has been doing since the 70s.”

Pittman traced the history of the Army Corps of Engineers (USACE) and its importance to the military back to the founding of the nation, noting that almost as soon as he became commander of the new American Army, George Washington knew he needed scientific expertise.

“Two days in, he said, ‘I need an engineer.’ So he hired his engineers…We literally helped build this country,” he said.

Pittman recounted that the history of the USACE included military readiness as well as civil projects. But throughout its history, one thing was missing.

“Between that civil works mission, protecting our inland waterways and our shores and beaches and all the…military programs and missions that we do with protecting our warfighters…we’ve never had a comprehensive R&D [Research and Development] strategy,” he said. The new ERDC building is part of the new comprehensive strategy of the USACE.

The public was introduced to the new facility by Kate Brodie of the FRF Coastal Hydraulics Lab.

In an interview before her remarks about the ERDC facility, Dr. Brodie described how the 46 years of measurements, combined with cutting-edge science at the FRF, has application for civil and military use.

“Because of those measurements and the continued innovation in techniques, it has allowed us to develop technologies that can help us improve the management of our coastlines here at home…making more resilient communities, but also helping make our war fighters safer when we need to go overseas,” she said.

In her comments to the public, she described how dynamic the nearshore environment is and how that can impact operations.

“If you are trying to move people and equipment through the surf zone, that can be a really challenging problem. It’s a super dynamic environment,” she said. “If you go out and you take a survey one day and figure out what the water depths are, where all the sand bars are, what the slope is at the beach, you might come back two days later, and it may look completely different.”

To address that, while still in a trial phase, drones are being developed that will provide data that can be analyzed to tell planners what is happening in the nearshore environment at all times the depth of the water, the wave height, whether rip currents are forming.

“The natural environmental hazards are really taking a lot of their attention away from the other tasks at hand. And so our goal here is to really help make that process safer and more efficient for them. We don’t want any of our war fighters to get injured or you know, have loss of life due to an environment hazard,” she said.

“How do we take a surfer’s brain, right?…It’s really scary and challenging, and they did it here. They were able to digitize the surfer’s brain and put it into…our boats and people,” she said.

The celebration of the new building also included a tour of the FRF—something that for security reasons has not been available for some time.

Standing on the concrete pier, Research Oceanographer Patrick Dickhudt noted that the data collection and tools at Duck Pier have made it an international center for research.

“Researchers from around the world come here because we can help them do things that we do things routinely at the FRF that are impossible anywhere else,” he said.