Along with Kitty Hawk site, Corolla proposed as second location 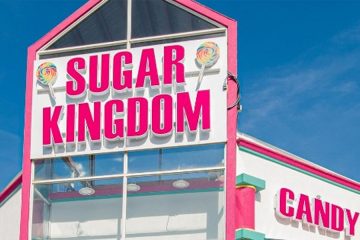 According to a company official, Sugar Kingdom, which currently has stores in in Nags Head and Kill Devil Hills, plans to open soon at two new locations. In addition to the Kitty Hawk site that has been in the works, the second store will be located in Corolla.

“We are very excited to open two other Sugar Planets – one in Kitty Hawk, one in Corolla,” said Naor Hilel, regional manager of the candy store operation. “With new management in place, we are working to get the existing stores upgraded with paint and new signs. It was a rough two years with COVID and hurricanes. We are happy to serve the local community as well as the tourism. We want to be your candy shop.”

When contacted by the Voice, the Currituck County Planning & Community Development Department said this is the first time they had heard about a Corolla location.

“We can’t find any documentation or applications in our paperwork for any kind of Sugar Kingdom location,” said Jennie Turner, one of three Senior Planners for Currituck County, adding that they do have buildings that could be used for a new Sugar Planet location if the company does apply for permits.

The Kitty Hawk location is at 5201 N Croatan Highway on a one-acre piece of property located just south of Outer Banks Furniture and across U.S.158 from the former Sentara Medical Center. A building permit for the project was issued in August 2022 and the facility is in the beginning phase of construction.

When asked by the Voice, Hilel could provide no further information as far as timetables for either location or a specific location for the Corolla site.

News of the Kitty Hawk location has been met with some social media backlash and discussion about whether a third 7,500 square-foot retail candy store is needed in Dare County.

One complaint, which was addressed in the statement from Hilel, is the appearance of the stores in Nags Head and Kill Devil Hills, with some criticism that the existing stores are “eye sores,” and make the Outer Banks look “trashy,” with chipping paint and multiple letters in their signs burnt out.

The main point of contention evident in comments on social media from local residents is that the Outer Banks is losing its historic, cottage village-like charm that differentiates it from larger, more “touristy” beach cities — leading to what one Southern Shores man characterized as the “Myrtle Beachification of the Outer Banks.”

“I realize we live in a capitalist society, but the last thing we need is a giant box store and a huge paved parking lot in between the highways,” said a Kitty Hawk resident. “The town does have control over this. They won’t even allow much smaller vendor markets to operate in Kitty Hawk.”

In an interview with the Voice, Rob Testerman, Director of Planning and Inspections for the Town of Kitty Hawk, clarified that the new Sugar Kingdom is a permitted use and meets the zoning requirements.

“So, even knowing what it was, if, if we didn’t want it, you know, we really would have no legal basis to deny it. A lot of the comments on social media were kind of acting like we had a choice in the matter, but it met the requirements, so we’re legally bound to approve,” says Testerman.

Kitty Hawk states in its Coastal Area Management Act (CAMA) Comprehensive Land Use Plan Microsoft Word – KittyHawkLUP Cover.doc (kittyhawknc.gov) that it supports efforts and regulations that help to preserve and maintain the town’s appearance and the concept of a “community appearance theme.” But Testerman stated that “the Land Use Plan is a guiding document, used for basing policy decisions—it does not set actual policy or regulations. We would need to have that language in our Town Code, in the applicable zoning ordinance, in order to regulate the appearance of a commercial structure.”

In the current Land Use Plan, Kitty Hawk had made a commitment to “develop a position paper outlining its desires for maintaining its established community theme as a low density, low rise residential beach community with coast guard station style architecture predominant by the end of Fiscal Year 1997-98.” It also vowed to study the creation of an architectural overlay district and an architectural review committee. As Testerman confirms, the town did not follow through on those commitments.

But Kitty Hawk is in the early stages of updating the CAMA/Land Use Plan. And Testerman said that any potential amendments to the town code will be mainly driven by community and public input. He encourages residents to voice their opinion at upcoming public information hearings held by the Kitty Hawk Planning and Inspections Department.

The next hearing will be on February 7, with a tentative time set for 5 p.m.-7p.m. More information can be found at kittyhawknc.gov/land-use-plan-update.